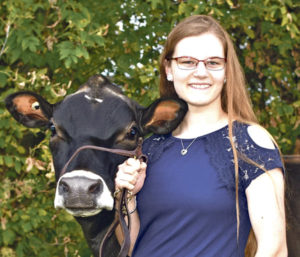 Recently, the Animal Ag Alliance announced the winners of their College Aggies Online initiative, which connects college students across the country who are interested in promoting agriculture. Participants receive training from industry experts and social media-savvy farmers to engage on social media about current and emerging issues facing farmers and telling personal stories.

In 2020, more than 275 individuals enrolled in the competition, according to Casey Kinler, Alliance director of membership and marketing. Students’ posts reached 879,000 people on Facebook and Twitter throughout the nine weeks of the program, demonstrating their success in sharing positive, factual information about animal agriculture with the general public.

Kathryn Bosley, a senior at SUNY Cobleskill, won second place this year, earning a $1,000 scholarship. The Alliance named her their “Social Media Rock Star” for entering the best social media post of the competition as well.

Bosley is originally from Malone, NY, where she and her family have 50 registered Jerseys at Tierney Farm Jerseys. The farm was started by her maternal grandfather. When she was younger, she participated in 4-H, the Junior Jersey Association and the Junior American British White Park Association. (She raises the White Park cattle with her grandpa; working with that breed is his retirement project.)

She’ll be graduating in the spring with a bachelor’s in animal science and a second major in dairy production. She’s looking to go on to attend Penn State to earn her master’s in dairy cattle genetics.

“I competed in College Aggies Online last year, and took second place then,” Bosley said. “It’s a fun contest, and you learn a lot from the project.” She said she’s been an agvocate for a year and a half. “It’s a fun industry in general, and with College Aggies, I do get to branch out to learn about other animals.”

She said her favorite lesson this year came from Dairy Management Inc., which included tips on using social media, such as the best time to post and the best use of formats – video makes for better content on Facebook, for example. “It takes a lot to figure out what you’re doing,” she said.

Bosley seems to have found her way, as she was dubbed a “Social Media Rock Star.” “It’s kind of funny, the post that made me a ‘rock star,’” she said. “It was about antibiotic use in turkey farming. I explained that you only use them when you need to, and take into account withdrawal times. It’s surprising what works when it comes to getting people’s attention.”

After completing college, she’d like to continue to work in the industry, either doing research or starting an AI company. “I really enjoy imparting information on other people,” she shared.

In addition to the individual winners, 19 students earned the College Aggies Online Excellence Award for rising to the top of a very competitive field, including Emily Hiller, also a student at SUNY Cobleskill.