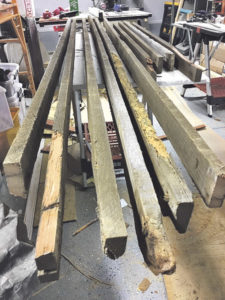 A reader responded to our story “Reincarnating reclaimed barn wood” with a story of his own.

Everett Bennett, who has served as a U.S. Army Air Defense captain, an agricultural engineer, an assistant professor in ag engineering at the University of Delaware and the Delaware State 4-H program director, shared that he recently completed a project in which he converted slats from an 80-year-old corn crib that’s falling down on his farm. He pulled some slats and used them to make picture frames.

“I used them in two ways: Natural weathered slats and planing off the weathered surface to natural wood,” he told Country Folks. “I am very pleased with the results. As a youngster, one of my jobs was to haul ear corn from the field to this corn crib. The frames have special meaning because of that.”

Bennett thought it was an interesting project, given his connection with actually using the corn crib that provided the slats. “The corn crib is well beyond its useful life and will be removed at some point fairly soon,” he said.

Additionally, a local artist painted a farm scene of a corn harvest. It shows an empty wagon being taken back to the field and a full wagon going to farm. The road the artist painted is part of Bennett’s farm. He said it’s very similar to what he remembers as a youngster doing those jobs. That print is framed with his naturally weathered corn crib slats.

To see the full story and pictures of the process, check out his website at everettbennett.com/Projects.html (and scroll down to “Picture Framing Project”).

Have you done any interesting projects with reclaimed barn wood? Let us know! Email Assistant Editor Courtney Llewellyn at cllewellyn@leepub.com.