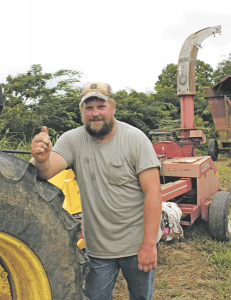 SILER CITY, NC – Come mid-October, many residents of North Carolina will feel a certain sense of longing. The North Carolina State Fair, typically held then in Raleigh, is cancelled this year as a precaution to help prevent the spread of COVID-19.

The Jordan and Robbins families of Brush Creek Swiss Farms in northwestern Chatham County will be among those who will find another way to celebrate that time of year.

The Jordan family has been showing Brown Swiss at the fair for decades. The dairy has milked a closed herd of registered Brown Swiss since the late 1960s. The family’s current patriarch, Norman Jordan Sr., who is in his nineties, started acquiring Brown Swiss some years before that, after he was introduced to the breed as a student at NC State and came to favor their disposition.

Norman Jordan Jr., who today operates the farm with the help of his wife Karen Jordan and his nephew Cory Robbins, has particularly fond memories of the fair. That’s where he first laid eyes on Karen. He was at the pen where that year’s Brush Creek Brown Swiss were being held and Karen came walking through the barn.

The pair courted for several years as Karen finished her undergraduate degree and then enrolled and graduated from NC State’s vet school. Today, Karen still practices large animal veterinary medicine, with a focus on dairy production, but most of her attention is on Brush Creek’s herd. There are 77 milking cows which get milked two times a day in a double-six dairy built around 1980. The cows produce an average of about 70 pounds a day, at 4% fat and 3.4% protein. The fact that the formula for the price of milk in the Southeast does not include a component for true protein is something Karen would like to see changed.

Aside from managing the Brush Creek herd, Karen is the vet for a handful of other dairies, numbering some 700 animals. At one point, she was the vet for over 30 dairies and some 6,000 animals, but as the NC dairy industry has shrunk, so too has her veterinary work. “I’ve worked with all the dairy breeds but milking shorthorn, and Brown Swiss are my favorite,” she said. “You can work them with minimal restraint.”

As Karen’s off-farm practice has diminished, she’s found herself spending more time on the farm, doing a lot of the milking and managing herd health and nutrition.

For the last couple of years, the dairy has used the CowManager system and its health and breeding modules to make better management decisions. And they’re planning on a change that will help them fine-tune their management practices even more as well as increase efficiency. Brush Creek is looking to build a robotic dairy.

“What we’re doing now is not at all what we were doing 40 years ago,” Norman Jr. said. “That leap forward is going to continue to happen.”

“I’m convinced robots are the way to go for smaller producers,” said Cory, who has been working full-time on the farm for five years. “Smaller producers have got to embrace ways to get more efficient.”

“Robots would give us even more information than we’re getting now,” said Karen. “It would give us more time to manage cows and manage data coming through the system. And it should give us a better quality of life.”

The dairy is presently holding on to its heifers, looking to grow its herd to about 120 milking cows, to be of sufficient size to accommodate the costs that will come with building a new dairy. When they build a new facility they will also redesign the layout of the farm roads.

“When we built the driveway it was to accommodate the big trucks of 40 years ago,” Norman Jr. said. The larger tractor trailers of today can maneuver on the driveway, but it is tight.

A similar thing happened when the Jordans built a barn to hold commodity deliveries. The barn was built high to accommodate the dump trucks of the day. Today deliveries of ground corn, soybean meal, corn gluten, soybean hulls and cottonseed hulls come on trucks outfitted with an augur or walking floor.

To make sure the dairy makes the right decisions when they build a new facility, this year Cory, who is in charge of the crops, is going to tour some Southeastern dairies which use robots “once the last tire is on the sileage,” he said.

Building a new facility is not without its risks, but being a dairyman of any sort is a perilous occupation in this day and age. Making the investment in a new facility, Cory said, “is like diving into water well above your head and not knowing what the future is.”

The Jordans and Cory (whose wife Ashley Robbins works for NC Extension as the state area specialized agent for commercial dairies) are committed to keeping the farm going. Norman Jr. is the family’s fourth generation farmer and third generation dairyman, and the farm is closing in on being a century dairy.

One way they get by is by doing the bulk of the work themselves. There is no regular help, though family and friends do help at need times like harvest. But even getting help then is hard. “It’s getting harder and harder to find people who know how to drive a standard transmission,” Norman Jr. said.

One thing the Jordans and the Robbinses have in common is they all volunteer in agriculture organizations. Cory and Ashley are leaders in the local farm bureau and promote the young farmers and ranchers program. Norman Jr. is a 20-year past president of the NC Dairy Producers Association and past president of the NC Purebred Dairy Cattle Association.

“It’s important as producers to be active and represent our own interests,” Norman Jr. said. “If we don’t, someone else will. You’d be surprised how important it is to have a producer in a room when there are decisions being made regarding regulations which impact farming.”

Karen currently serves as the chair of the Animal Health and Wellbeing Committee of the National Milk Producers Federation. She also serves on the Southeast Area Council of DFA. In the past, she has been involved in writing national technical documents including animal care manuals and best management practices regarding drug residue prevention.

By working on matters of national importance, Karen has developed a perspective which allowed her to see there is room for improvement in the cooperation of various regional milk cooperatives. “I would like to see them work better together,” she said.

She is impressed with how much of the staff on the national milk boards have dairy backgrounds. “We’re very fortunate to have them,” she said.

Just as the agricultural and broader community of NC and beyond are lucky to count Brush Creek Swiss as an operating dairy with the Jordans and Robbinses at the helm. That’s something to celebrate.