Deb Robie tends to her flock of sheep 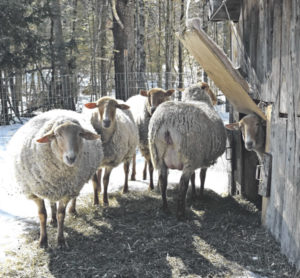 BATH, NH – Deb Robie finds continuing to raise animals on her two-plus-acre lot on an unpaved back road makes all the difference in maintaining her interest and enjoyment in life.

“My sheep flock is fairly small,” she explained on a vacation day from her job as a one-on-one special education aide at a local public middle school. “I have seven brood ewes, two yearlings and expect to have 13 lambs by mid-March. I’ve always been a farmer, starting as a dairy farmer on my family’s farm in Plainfield. Then I graduated in 1980 from the two-year Thompson School at UNH. My husband used to say – with a chuckle – that it was a 4-H project turned bad,” she explained.

Deb’s husband, Dwight Robie, to whom she was married for 30 years, died three years ago.

“Our son showed dairy heifers, but my daughter decided to show sheep,” she said. When her daughter opted to raise sheep and was given two Tunis lambs, Deb telephoned her nutrition professor at the T School for advice. “I knew he raised sheep, so he was the logical first call,” she recalled.

When her younger child went off to college, Dwight assumed that the sheep would soon leave too, but Deb realized that she enjoyed having them around, breeding, raising and showing them as well as staying active in NH Farm Bureau and volunteering for 4-H and at the nearby North Haverhill Fair. Deb finds that she can manage her flock quite competently on her own.

Tunis sheep are a relatively rare mid-sized breed raised for either meat or wool, Deb explained. Breeding rams are in the 250-pound range, and ewes weigh 175 to 200 pounds. “They’re fantastic mothers and best of all, they’re calm,” she said. “You can take them to show at a fair, and when they get to their new quarters they’re okay just standing there. They can be bred year-round, although I usually breed them in the fall for January or February births.” Their gestation period is five months.

“Their color is unique; their fleece is cream-colored and their faces are ‘red’ or mahogany when they’re born, and then lighten up to cinnamon,” Deb said.

Deb sells her lambs as registered breeding stock and as market lambs. “Sometimes I sell to beginning 4-H’ers,” she said.

“The Tunis is one of the oldest breeds of sheep, having descended from ancient fat-tailed sheep referred to in the Bible,” Deb explained. “As you can tell from the name, the Tunis originated in Tunisia on the northern coast of Africa. Today, interest in the Tunis sheep is stronger than ever.” The National Tunis Sheep Registry Inc. is continuing to grow; learn more at countrylovin.com/NTSRI.

The post Deb Robie tends to her flock of sheep appeared first on Country Folks.