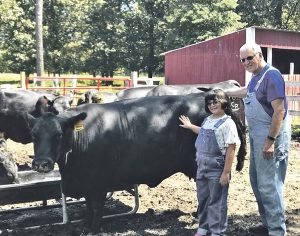 Jerry Gustin lives more than 2,000 miles distant from his Oakland, CA, birthplace on a 30-plus acre swath of land just across the York River from two of America’s most historic landmarks – Yorktown and Jamestown.

For Gustin, a Vietnam veteran and U.S. Army retiree who runs a herd of registered Angus near Gloucester, VA, it’s the latter that holds the most appeal, with Jamestown marking the start of westward expansion and the beginning of a vast frontier.

It’s really remarkable what those settlers had to endure, noted Gustin, father of three grown children and a grandfather now.

When their kids were still at home, they helped with feeding, putting up hay and other chores. Since they left for college, Gustin and his wife Karen have run the farm, including outdoor work, bill paying and recordkeeping.

The Gustins bought the farm in 1988 and added to it since then. They raise cattle and hay and purchase silage and grain that they grind as a supplement. They utilize AI exclusively, with the exception of any ET work they do.

“I never use a bull in the breeding program,” said Gustin. “If we cannot get a cow settled AI, I sell her. For the small producer, I think AI is the most critical tool you can employ. We are able to avoid the cost of maintaining a bull for a small number of cows and AI allows us the flexibility to be able to use different bulls that best complement the strengths and weaknesses of individual cows. We use AI sires routinely that we could never afford to buy.”

The exclusive use of AI makes the farm unique, according to Gustin. With very few cattle farms in Gloucester County, many residents know little or nothing about cattle operations, he said.

“We get a few people each month that stop by just to look at cows. For the most part, they have many misconceptions about how cattle are raised. I always take time to tell them all I can about how we handle cattle and the care we provide for them each and every day.”

The mapping of the bovine genome and advancements in DNA technologies have changed animal breeding forever, equipping producers like Gustin with new selection tools. The 2010 Virginia Angus Association president was an early advocate of DNA technology, collecting DNA samples on his herd and benefiting from the information incorporated into his expected progeny differences (EPDs). Gustin makes extensive use of ET, and the use of DNA has not only helped him reduce financial risk but also target cattle that best match his breeding objectives.

“I think the smaller producer is always at somewhat of a disadvantage,” he said. “We get no economies of scale and in the cattle business. We miss the opportunities of market cattle out of large contemporary groups. Having a heifer that is best in a contemporary group of eight is not nearly as powerful as the best in a group of 80.” Yet with DNA testing, Gustin can get the same amount of information on his cows that a large herd can get. He can study it and make informed mating decisions, perhaps even more than a manager of a large herd can, deriving objective and quantifiable marketing information, regardless of herd size.

“I had always worked under the misconception that my ET calves would all be about the same genetically, with some minor variation,” Gustin continued. “Of the seven calves we got from a recent joint venture flush, we DNA tested the two bulls. There was a major difference between these two bulls for calving ease direct (CED), carcass and dollar beef value. The one that gained the best didn’t come out nearly as well as the other one for the traits I consider important. That’s why the DNA technology is so important, and how it can really help producers like me zero in on which cattle truly possess the most genetic merit.”

Another way DNA testing has helped advance Gustin’s herd is feed efficiency. Until the testing came along, he had no way of obtaining any feedback as to how cattle measured up for feed efficiency, which is critical to long-term sustainability of the cattle industry.

Today’s bull buyer is more refined and requires a lot more data in making his buying decisions, said Gustin. Phenotype and price used to be the predominant considerations. While these factors are still important, producers have a lot of other data they can provide that help a buyer make informed decisions.

“We have EPDs that help select bulls that complement the herd’s females and aid in overcoming cow shortfalls. We have ultrasound information that helps enhance carcass traits by knowing exactly the composition of the bull, his intramuscular fat and rib eye area readings. Finally, we have DNA technologies that among other things confirm parentage and increase the accuracy of other EPD rankings for informed decision making. Most of these types of data were not available or were in their infancy when I began in the registered cattle business.”

Because of pandemic dangers, Gustin does not attend seedstock sales in person. However, with online sales, he can watch cattle sell and get a feel for what traits the marketplace and buyers are prioritizing.

While attending Creighton University in Omaha, NE, “I received a no-option RSVP-free ticket to a place called Vietnam,” Gustin recalled. “Army life appealed to me and that was the beginning of a 22-year career. I bought a Hereford bull and kept him on a close friend’s farm in western Kansas. I experimented with Angus cross Herefords and in the 1990s began the transition to registered Angus. Cattle breeding started as a hobby, but quickly morphed into a passion. Building a better bull intrigues me to no end. I believe in knowing all you can about a cow and using tried and proven bulls. I do everything I can to be the type of bull seller that I would want to buy from.”

Gustin has been named VA Angus Seedstock Producer of the Year, serves on the VA Angus Association Board of Directors, the VA Beef Industry Council and on the board of his local chapter of the Virginia Farm Bureau.

Gustin, whose parents came from cattle and dairy farms in the Midwest, said his inspiration comes from “just being around cattle, the rural lifestyle and enjoying the beauty of nature.”

“A close second, however, would be receiving positive feedback about the cattle I sell to new owners,” he noted. “When someone calls and says that one of my bulls is siring some exceptional calves, it gives me a feeling that is hard to beat. I like to see our cattle go on to their new homes and be productive for their new owners. I also AI cattle for small dairies and several other small cattle operations. It’s a great source of pride for me to receive a picture or an email from one of these telling me about their new calves. It reminds me of the first calves I had on this farm and gives me a good feeling to know that I have helped them advance their genetics.”