Dreams do come true, even during COVID-19 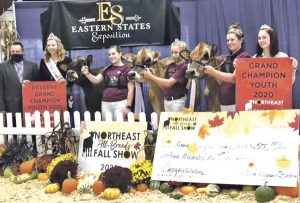 Along with my friends and my cows, we recently had the privilege to participate in the 2020 Northeast All Breeds Fall Show in West Springfield, MA. It was different than normal. We had to be masked at all times and there were no spectators – only those working and showing. There was no sleeping or food preparation in the barns, and liability forms had to be signed upon entering. Regardless of this, the atmosphere was incredible.

After the NY Spring Dairy Carousel, the CT State Show, the Eastern NY Holstein Show, World Dairy Expo and the Eastern States Exposition were all cancelled, my hopes of showing cows in 2020 were ruined. My brother and I put a lot of work into our animals and to not be able to exhibit them seemed like torture. We thought, “Who knows if our cows will ever look this way again? I just wanted to show.” Then came the rumors of a show at the Big E grounds in West Springfield. The Northeast Fall All Breeds Show was announced in early September and was to take place from Oct. 11 – 21. Many were apprehensive that it would also be cancelled, but I could not contain my excitement.

At last, on Wednesday, Oct. 14, the sounds of clippers, vacuum pumps and music returned. Showmanship began that afternoon and it was so great to see youth going into the ring with big grins on their faces, ready to compete in what we had been practicing all summer. Casey Wolfe from Connecticut judged showmanship Tuesday afternoon and placed the following:

That in itself made the trip worth it to me. All at once we were reminded of our passions for the industry and love of being in the showring. The evening continued with the heifer show starting at 4 p.m. The judge was Adam Liddle of New York. He declared the junior champions as follows:

After an exciting heifer show, many exhibitors started to bag cows for the next morning and celebrate wins from that afternoon.

(For full results, check out cowsmo.com/events/northeast-all-breeds-fall-show-2020.)

Even though you couldn’t see anyone’s smile under the masks, they were there. The quality of the cattle throughout the show was amazing in every single class. It was an exciting day for not just me but everyone. At the end of it all, I don’t think that exhibitors were very concerned with how their animals placed but were just happy to be back to doing what we love. The best part was seeing a majority of the animals entering the ring owned by youth. It really showcased the future of the dairy industry. Along with everyone else involved, we were happy to be at a show, and one with such tremendous quality, facilities and an exceptional show committee to work with.

A big thank you to everyone on the committee, sponsors and volunteers for making the Northeast Fall All Breeds show a success. Here’s hoping that next year’s show season will be a bit more normal.

The post Dreams do come true, even during COVID-19 appeared first on Country Folks.