Elkins Distilling above board in Estes Park 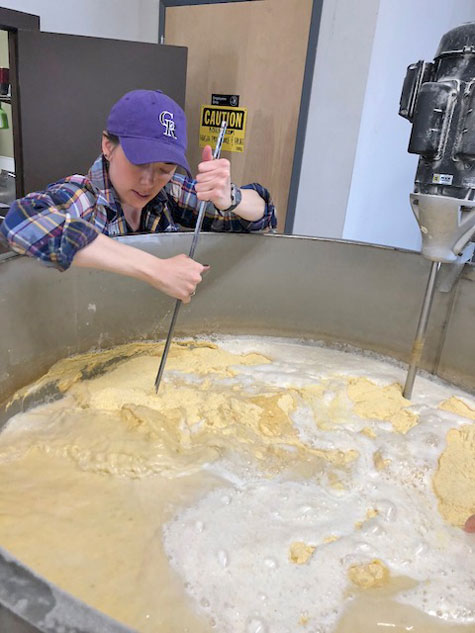 More often than not, when combining wedding guests, alcohol and the occasional misdemeanor, the result is not a successful business.

But sometimes it is.

Elkins Distilling, located in Estes Park, CO, was first opened in 2016. The collaborative effort of Joe Elkins, Nathan Taylor and McShan Walker, the distillery has met with great success in a very short period of time.

As for their rather unusual origin story?

“Joe and Nathan are from Georgia, and I’m from Alabama,” explained Walker. “We all grew up around moonshining. It’s second nature to us. Joe and Nathan are lifelong friends…together since grade school. They had also been friends of my brother-in-law for a while. We met up at a wedding about five years ago, and Joe had brought some of his own homemade stuff to drink, stuff he had distilled at his house.” He paused before adding, “He didn’t have a permit or license or anything like that, so technically every time he distilled something, it was a misdemeanor!”

Walker laughed and said that then and there they “decided that this could be something we could all do together as a business.” They were the distillers; Walker was the marketing guy.

“Also,” Walker chuckled, “we knew some people who were distilling whisky professionally, and if they could do it, well… That led us to believe that it wouldn’t be crazy hard!”

Nevertheless, there were some considerable hurdles at the start. Local zoning laws had to be changed in order for brewers and distillers to operate in Estes Park. Walker credits local brewer Nick Smith, of Lumpy Ridge Brewing, with spearheading the effort. “Nick really took charge and did a great job in lobbying for the changes we all needed to operate,” he said. The local restrictions were lifted in 2014. 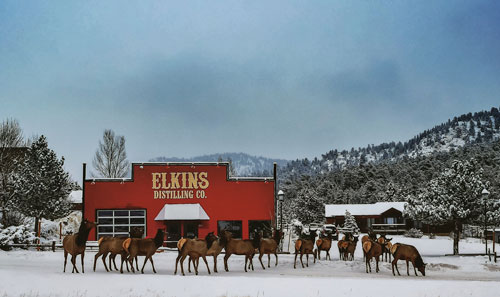 Now able to operate on the right side of the law, and leaving their misdemeanor-laced past behind them, the trio set up shop in a disused building that had previously been a machine shop and auto garage. Working in what was formerly a large industrial facility gave them enough square footage to have room for a large distillery, taproom and event space.

“Despite having a relatively small population – less than 8,000 people – Estes Park is the gateway to the Rocky Mountains National Park and we get nearly five million tourists passing through town each year,” Walker said. “Having the building we have, the space we have…we’re able to host much more people.”

As for the distillery’s offerings, Walker describes their non-aged corn whisky as “80% corn, 12% rye and 8% barley.” That is sold as Elkins White Whisky, but it also serves as the base for their other products, such as their Elkins Colorado Whisky, which is oak-aged. “It’s also the base for our Elkins Apple Spiced Liquor,” said Walker. “It’s very popular.”

As the business thrived, expansion became inevitable. Elkins’ products are now distributed to over 150 locations throughout Colorado. Demand for Elkins’ whisky necessitated a second location in Estes Park, a bottle shop which opened in March of this year. In order to keep up with the heavy flow of thirsty patrons, the staff at Elkins has increased to over 10 employees, with additional seasonal help taken on during the busiest seasons.

What’s next for an enterprise that came together from a group of well lubricated nuptial witnesses? Walker said, “Our third anniversary is coming up fast – on July Fourth, in fact. We’re currently working hard to have our newest offering, a wheated bourbon, out in time for the summer celebration.”

The post Elkins Distilling above board in Estes Park appeared first on Wine and Craft Beverage News.