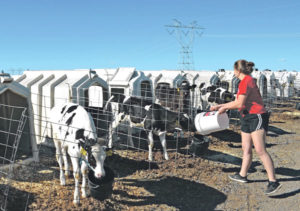 Dairy farm managers value a reliable workforce, but how do they make sure that’s what they’re getting when they hire? Jorge Delgado, Alltech Dairy On-Farm Support, said the top two criteria dairy employers list for applicants include strong problem-solving skills and the ability to learn new concepts.

Personality tests help answer questions such as “Will the employee be comfortable in this role? Does the employee have behavioral traits linked to success in this position?” “Unlike aptitude tests, there are no right or wrong answers on personality tests,” said Delgado. “Measuring these traits can help employers predict job fit by determining if a candidate’s behavioral tendencies are a good match for both the position and the dairy’s culture.”

Personality tests are usually administered when an employee is hired and measure a variety of traits. The most prominent test framework uses five dimensions of personality that consistently emerge in empirical research. They include agreeableness, consciousness, extroversion, openness to experience and stress tolerance. In contrast, skill tests measure job-related abilities that candidates have picked up through their education and career histories. Such skills reflect what the applicant already knows based on previous experience.

A workplace productivity profile can be used to predict whether an individual will be a conscientious, productive and reliable employee. It’s used primarily for entry-level positions where following rules for milking routines, calving SOPs and cleaning stalls is important. This test can help predict overall performance as well as screen out candidates likely to be more prone to possible disciplinary problems. The test measures several traits and can be taken online. Applicants who have high rating have a high likelihood of being diligent, reliable and productive. The integrity section helps weed out those likely to engage in counterproductive work behavior such as theft, wasting time or fraud.

Conscientiousness and perseverance relate to a person’s likely work habits. Conscientiousness is an indicator of a person’s tendencies to be deliberate, self-disciplined, organized and dependable. High scores tend to be reliable, hard-working and goal-oriented. They’re also likely to be organized and rule-followers. Low scorers tend to be less cautious and described by others as laid back, less goal oriented and possibly impulsive.

Perseverance measures a person’s tendencies regarding diligence, consistent interest and persevering in the face of adversity. “High scorers are not easily discouraged, maintain consistent interests and focus on long-term goals,” said Delgado. “Low scorers tend to change interests frequently and may be more inclined to change course rather than press on when faced with setbacks or adversity.”

Honesty relates to integrity and perceived risk of engaging in counterproductive work behavior. It measures a person’s beliefs in the importance of following rules and laws. Delgado said high scorers favor consistent application of laws and moral rules and tend to place a high value of honesty and integrity in dealings with others and animals. They also tend to respect authority. Low scorers endorse more flexible attitudes toward rules, often allowing exceptions. They also tend to be distrustful of others. Delgado suggested the honesty test is useful for people who oversee the use of antibiotics.

Nearly every dairy deals with theft, and the test addresses this risk. Individuals who score highly in this scale show little tolerance for theft or fraud. “They do not see fraudulent behavior as common or excusable,” he said. “They do not report any inclination of their own to carry out theft – this is very important.” Those who score low on attitude toward theft will view theft and fraud as common in the workplace.

“If you use a personality test on your dairy,” said Delgado, “make sure the test contains an internal scale assigned to detect which individuals exhibit tendencies to fake the test or present themselves in an overly positive light. In some cases, we have the opportunity to help farmers catch animal activists before they get hired because they usually try to represent themselves in an overly positive manner so they can get hired and cause damage to the dairy.”

Delgado described workplace insights as a tool to enhance self-awareness and encourage growth and development among existing employees among employees. “You can have a visual understanding of employees’ workplace stressors and motivators that will help you understand his or her behavioral preferences,” he said. “This report may also be shared with team members and managers so they can become aware of employees’ work styles and how his or her behavioral tendencies may influence interactions with team members.” The summary compares a dairy’s employees with the general population and can enhance self-awareness and encourage growth and development.

Internal surveys can help employers discover or restructure the internal structure on the farm. Delgado defines internal or organizational culture as the ensemble of beliefs, assumptions, values, norms, artifacts, symbols, actions and language patterns shared by all members of your dairy. “Culture is thought to be an acquired body of knowledge whose interpretation and understanding provides the identity of the dairy,” he said, “and a sense of shared identity among all employees.” Internal surveys should be conducted when the population includes several new employees, or at least once a year.

Delgado said an easy way to determine how employees view the internal culture of the dairy, if one exists, is to ask for their feedback in a way that allows them to share their own opinions. “Look at yourself in the mirror as a manager and find ways to improve or redesign the culture in your dairy,” he said. “Internal surveys can help you measure internal structures, systems, technologies and skills and qualities so you can address areas of concern to not only improve workplace culture, but improve employee productivity and motivation.”

Employers who use personality tests and similar tools should have realistic goals and expectations for what testing programs can achieve. Delgado urged dairy managers to use professionally developed, validated testing in order to obtain objective, data-driven metrics for the hiring and retention process. “It’s important to keep in mind that no test is a perfect way to predict performance,” he said. “The employment test should be only one element within a set of criteria to evaluate applicants or existing employees such as references from other dairies, team members, interviews, job experience, education and whatever else is relevant for a position.”