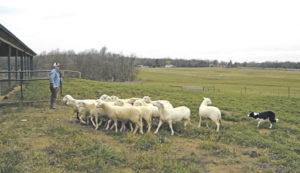 Dan Turner will be the first to admit he didn’t always lamb right. In fact, he knew close to nothing about raising sheep when he purchased his first animals.

Although Dan started with a ragtag group of sheep (by way of a Border Collie), he quickly became one of the nation’s premier breeders of Katahdin sheep in Shippensburg, PA.

While many in the industry begin with a few sheep, others begin with a dog, and that’s what Dan did. After watching a sheep herding demonstration, he decided that was something he wanted to do. Although Border Collies aren’t the breed for the average pet owner, Dan fully intended to train a dog to the best of its ability. He purchased one, started training, and when the dog was about three years old, Dan connected with a Border Collie trainer who became his mentor. “The joke was that I told my dog that if he did well at the first trial, I’d buy him some sheep,” said Dan. “We got a blue ribbon the first weekend, so I bought some Icelandic sheep.”

As Dan honed his sheep-working skills, his mentor suggested he was wearing out the small group of sheep and should add more. Dan bought what he was told were three Katahdin wethers, and was stunned when he went out one morning to find one of his Icelandic ewes had given birth to twins.

In 2013, Dan and his wife Jan purchased the farmland they had been using to pasture their small flock. “We had no handling facilities and we knew nothing about raising sheep,” said Dan. “One day when I was shearing by myself, Jan came out and found me on the ground, on my back, with a sheep on top of me.”

While Dan knew he still had a lot to learn, one thing was for sure – he was not interested in mastering sheep shearing. Aside from shearing challenges, the Turners realized sheep farming probably didn’t have to be as difficult as it was in the beginning, and decided Katahdin hair sheep were the best option. They continued learning through trial and error, reading as much as they could about raising sheep.

In 2014, the Turners purchased a registered Katahdin ram from a breeder in Maine, where the breed was created in the late 1950s. Dan learned that the Katahdin breed registry was open, and began to breed up using the ewes he had. Seeking more information on raising sheep, he enrolled in Penn State’s small ruminant course. He learned a lot of basics about sheep, including the fact that his animals should have ear tags for recordkeeping purposes.

“We joined the Katahdin Hair Sheep International and started to learn as much about the breed as we could,” said Dan. “We went to their expos and seminars. A lot of the things we thought we’d never need to know, like forage sampling and fecal egg counts. It was way over our heads but we paid attention and took notes.”

That attention paid off. The Turners have advanced far beyond using ear tags and a simple recordkeeping system. Today, they’re raising over 200 high quality Katahdins, and have added technology to track data on individual animals.

“We’re using electronic identification [EID] ear tags,” said Dan. “We have a Bluetooth scale that sends data directly to our handheld EID wand. That has simplified our recordkeeping tremendously. Before, everything was on sticky notes all over the counter and on an Excel spreadsheet – it was a nightmare to keep track of ewes and their lambs and record data using a manual scale. With the EID system, we can collect all that data on three times more lambs in about 25% of the time it took manually.” Electronic data, along with a handling system that makes handling more efficient, has allowed the Turners to maintain a larger flock with far more data on individual animals.

The Ewe Lamb Right flock has been enrolled the National Sheep Improvement Program (NSIP) since 2015. This program uses Estimated Breeding Values to determine and track heritable traits, allowing breeders to accelerate improvement through intense genetic selection. Dan said genetic progress isn’t necessarily achieved through selecting the biggest or best-looking ram, but without the genetic data of an animal, it’s difficult to predict the level of flock improvement.

“Since we collected data according to what we were learning, we were able to send data for the two previous years,” said Dan, adding that the benefits of NSIP were immediately noticeable. “Now, instead of looking at pedigrees, the breeding values will be cross-checked and amplified with genomic research. The accuracies [of values] increase to the point where they’re more likely to be true. It’s never 100%, but with the right genomic information, we don’t have to wait three years to determine whether a ram is what we think it is. His genomics are established at conception, so when we check the DNA on the ram, we know what he’s going to be.”

Dan described his role on the farm as the CFO: Chief Forage Officer. “I’m in charge of feeding them and keeping them alive,” he said. “Jan is the CLO – the Chief Lambing Officer. She picks all the breeding pairs and records all the lamb and ewe data.” Dan said he can be in the barn working with sheep and need to record details on a particular animal – vaccinations, weight or lambing information. Rather than stopping to record information on paper, Dan sends Jan an email with a header that includes an ear tag number and provides information about that animal. Jan can then add the information to the system.

Sheep are maintained in a rotational grazing system most of the year. “We have about 65 acres of pasture, so we’re heavily forage-based,” said Dan. “Just as ewes are entering the last trimester of pregnancy, we begin to give them grain so they’re ready to feed their lambs. We creep feed the lambs then supplement them on grass right up until marketing.”

Dan said the Katahdins of today are much better than the originals, with a larger frame size and other desirable traits that make them profitable. “Katahdins are one of the most genetically studied sheep in the United States,” he said, adding that there’s a push for increasing and tracking parasite resistance. “There’s a lot of genetic progress through selection.”

Although Dan has advanced far beyond where he started in a short time, he hasn’t forgotten what it’s like to be a newcomer to the industry. He writes a column for The Katahdin Hairald Magazine titled “Here’s How I Do It,” in which he provides information on lambing, vaccinations, rotational grazing, scales or recordkeeping. “When I got started, there were a lot of things I didn’t know how to do and I didn’t know where to turn,” he said. “It wasn’t that long ago, so I remember what I didn’t know. I write about how I used to do things, what I’ve done since then and how I do it now.”