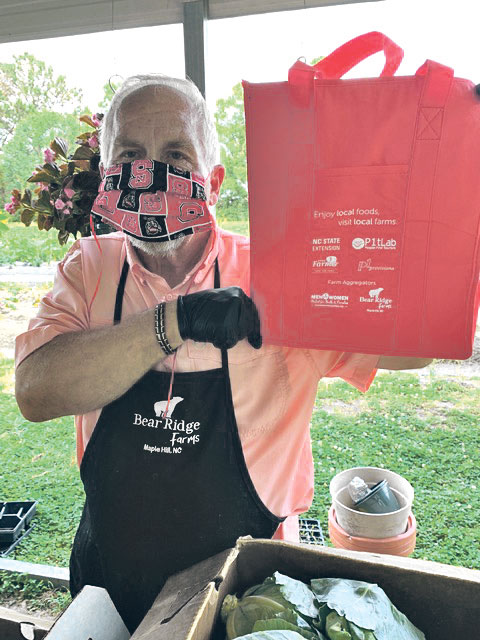 The VSA project was first introduced in 2018 and is jointly administered by the NC State Extension Program and the university’s “People-First Tourism Lab” (P1tLab). According to Becky Bowen, NCSU community development specialist and VSA program director, the goal of the VSA is to “connect small farmers with new opportunities to increase farm revenue through direct sales of fresh produce.” VSA assists local farmers in making connections with and capitalizing on the large influx of seasonal tourists to the North Carolina coast. There are currently over 40 farms participating in the program. “The program runs for 12 weeks, Memorial Day weekend to Labor Day weekend. We work with local realty companies who oversee summer rentals.”

VSA allows vacation home realties to showcase their commitment to the sustainability of their local communities by recommending local produce subscriptions to their guests. “In recent years, vacationers have expressed a desire to have convenient access to fresh local produce, connect with the place they are visiting by buying from local farms and leave positive impacts in the destinations they visit,” Bowen said. Participating farms decide how many farm shares they want to sell, and vacation renters are invited to pre-buy a week fraction of those shares.

“It’s all done online,” Bowen explained. “And there is one pickup site per beach where customers can collect their produce.”

She pointed out that weekly shares can vary. “There’s always tomatoes, sweet corn, peppers and squash. Then there are things like melons that are really more of a late summer thing.” VSA members can also receive grapes, blueberries and blackberries in their regular deliveries.

In its first year, the venture began servicing homes along five beaches in Brunswick County. The 2019 season saw the addition of Wrightsville Beach in New Hanover County, and Surf City in Pender County. The program has been very well received, now boasting over 1,000 subscribers. Over $6,000 was generated for local farmers in 2018; in 2019, that figure rose to over $57,000. Feedback from vacationing subscribers has been overwhelmingly positive, praising the produce’s freshness and flavor, although they would like to see more variety as the program grows. Over 75% of VSA members stated they’d be willing to renew their memberships.

The NCTTFC grant is a welcome windfall to the program, which to date has been largely funded by a Farmers Market Promotion Program Grant administered by the USDA’s National Institute of Food and Agriculture. Bowen has specific plans for how the grant will be used to better the program. “We’d like to expand to the Outer Banks, but there’s a cold chain issue with that,” she said. The barrier islands that comprise the Outer Banks are nearly a five-hour drive from the beaches the VSA initiative currently services. “They aren’t as easy to get to, and it’s become a question of how we keep all that produce cold and fresh for a much longer transport time than what we’re doing now.”

She said the grant money would be used to purchase equipment to store the produce at proper temperatures. Bowen stated that with the proper equipment, the VSA program can increase its range and move closer toward its goal of working with county Extension directors statewide to establish VSA offerings at vacation destinations throughout North Carolina.

For more information on the VSA program contact Becky Bowen, VSA Program Director at blbowen@ncsu.edu or 919.638.4317.