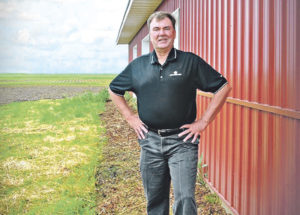 The average age of farm operators in America is on the rise. A full third of all farmers in the U.S. are at least 65 years old. It is more important than ever for these farm owners to engage in long term planning to ensure they’ll be able to leave their farm holdings to their heirs.

Workshop moderator Pat Wolff, a lobbyist for the AFBF specializing in tax policy, wanted farmers to appreciate the importance of taking the right approach to estate transfers. “Certainly, tax planning and financial planning is critical to the long term survivability of family businesses,” she said.

The presentation’s guest speaker was Paul Neiffer, a CPA and business advisor specializing in income taxation, accounting services and succession planning for farmers and agribusiness processors.

He stated that the two most common impediments to the satisfactory bequeathment of a family farm are income taxes, which are directly levied on yearly personal income, and estate taxes, which are imposed on a person’s total assets after their death.

The gift tax exemption is something he wanted all farmers to be aware of. As of 2020, an individual can gift up to $15,000 to another person without triggering any income tax obligations. Spouses making gifts to one another are exempt from this limit. Neiffer cleared up a common misconception about this mechanism. “The $15,000 limit applies to the donee and not the donor. Many people are under the impression that once someone has given a $15,000 gift they cannot give away any more. It’s actually a $15,000 limit on the recipient from that particular giver. That same giver can still give $15,000 gifts to others in that same year. And when you’re dealing with married couples, each spouse can give the same recipient up to $15,000 in their own right.” He explained that this is useful information for farm owners, especially parents, wishing to bestow their assets tax free to multiple children and heirs over a period of years. Any gifts exceeding this limit in a taxable year are currently subject to taxation ranging from 18% to 40%.

There is a lifetime limit on the giver, however. Currently, “we have a lifetime gift tax exemption. That means each person during [their] lifetime can give away $11.7 million,” Neiffer said. This limit is placed on the giver and encompasses all gifts given during someone’s lifetime, regardless of how many recipients there were. He added that the tax rate on gifts exceeding this limit “is pretty much a flat tax rate of 40%.” Again, he drove home that this exemption is applied to a single person, and that a married couple would collectively enjoy an exemption of nearly $24 million during their lifetimes.

There is also an $11.7 million exemption on estate tax, but those making their estate plans should be aware that this exemption is not granted in addition to the lifetime gift tax exemption. Both exemptions can be used, but the total amount exempted cannot exceed the limit set for either. “If you give away $5 million during your lifetime, when you pass away you really only have another $6.7 million that’s exempted. It’s what we call a unified credit,” Neiffer explained. Like the gift tax, the estate tax rate on inheritances exceeding the exemption is 40% – “so it doesn’t really matter if you’re giving as a gift or if it’s going to be part of your estate.”

He wanted webinar participants to be aware of possible changes on the horizon. Unless Congress takes any action, the $11.7 million lifetime exemption is scheduled to fall to about $6 million in 2026.

There is also a potentially profound permutation to inherited property tax basis rules. “The way it works right now, when I pass away, as a farmer, my land value gets updated to fair market value. Let’s say I originally paid $1,000 per acre, and now it’s worth $10,000 an acre. When I die, the land’s valuation will be at that ‘stepped-up’ $10,000 per acre. This means my heirs could sell that land and not owe any capital gains tax,” he said. A capital gains tax is a tax on the profit realized on the sale of a non-inventory asset such as stocks, bonds, precious metals, real estate and property. “During his campaign, President Biden favored repealing the step-up provision,” Neiffer added.

With the current step-up provision, a farmer who bought or founded a farm worth $500,000 could leave it to their heirs at the time of their death, with the farm having a fair market value of $5 million. The heirs would not have to pay any tax on the farm, as it falls below the current exemption of $11.7 million. Without the step-up provision, that same farm would not be transferred to a farmer’s heirs at the fair market value at the time of the original owner’s death ($5 million), but at its original price ($500,000.) This would mean that the farm realized a capital gain of $4.5 million. If the heirs were to sell the farm, they would have to pay capital gains taxes on that $4.5 million. The maximum current capital gains tax rate is 20%. Neiffer noted that Biden campaigned on increasing the capital gains tax rate. “He was proposing raising the maximums to 39.6% and 43.4%, depending on the transaction type.

“Will that happen? We don’t know. But it’s definitely something you’ll want to watch as you make your plans,” he said.