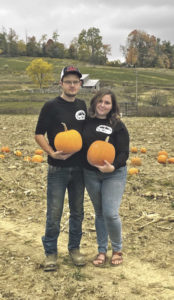 David Dickert grew up on a western Pennsylvania farm, and like most farm kids, started to learn his way around agriculture as a young man. “They raised potatoes and hogs,” said David’s son Ben, describing the early days on his parents’ farm in Mineral Point, PA. “My parents David and Joanna have raised beef cattle on this farm since 1997.”

Ben said his dad’s beef herd included about 100 animals in a cow-calf operation, but after David dealt with several bouts of illness, the family was forced to downsize. Ben recalled always looking for something else to do with the farm that was within what he could manage.

“When I was about 15, we got into the produce business,” said Ben. “My grandfather always had a big garden and sold produce on the side. Since then we’ve scaled up the produce.” Ben knew he wanted to stay on the farm, and with the help of his parents and his fiancée Michaela Slayton, Dickert Farms is thriving. Today, the farm is home to about 100 head of cattle, including 30 cow-calf pairs, and the family is expanding vegetable production.

Rather than guessing about herd nutrition, Ben has been working with a nutritionist to develop a homegrown TMR ration. “We’re really seeing the benefits of the TMR for the beef herd,” said Ben. “We can produce younger, better quality beef in a shorter time.” He said feeding a TMR is somewhat more complicated than simply putting out bales of hay for brood cows, adding that the TMR requires less physical labor and results in a more consistent ration for cattle of all ages.

The original cowherd included mostly Herefords and Hereford-Angus crosses, but when a nearby farm was selling their herd of Lowline cattle, Ben and Michaela purchased them. “Last year, we used Hereford and Angus bulls to breed the Lowline cows to increase frame size,” said Ben. “For the 2021 breeding season, we’re going to use a Lowline bull to breed the herd.”

Cows are kept on pasture year-round and have access to the barn in winter. In 2020, some of the herd calved in March and April and the rest calved in summer. “All of the cows calved on their own, on pasture,” said Ben. “They’ll calve in summer this year. It’s a busier time of the year, but a lot of the vegetable fields are next to the pasture so when we’re out working in the vegetable fields we can watch the cows.” The cows that calved last summer had access to ample shade and did well in the heat.

As last year’s calves mature, Ben is keeping an eye on the most promising heifers out of the best Lowline cows to retain as replacement heifers. He’s also satisfied with the steers from last year’s calf crop. “They’re nicely rounded out, and we think they’re going to grade better with more meat and less bone,” he said. Ben and Michaela plan to maintain about 30 brood cows, which Ben said is the number they can maintain on pasture in areas of the farm that aren’t suitable for growing crops or vegetables.

With the help of a broker friend, Ben purchases feeder calves in autumn when prices are typically lower. “We’re buying Herefords, Angus, White Park and baldies,” he said. “We also have few Charolais, which are larger framed.” Some of the feeders that have come in are females he’d consider keeping to raise as herd replacements. Calves born on the farm that won’t be kept as replacements are raised with the feeders.

Since Dickert Farms offers beef year-round, it’s important for Ben to have animals spanning a variety of weights for staggered harvest dates. Incoming feeder calves range in weight from 300 to 800 pounds, and for final finishing, the largest feeders are pulled to finish on a higher energy diet. “We had always gone to farmers markets; now we have people come to the farm,” said Ben. “We sell all of our beef as freezer beef and burger.”

In addition to cattle, Dickert Farms is home to pigs, turkeys and broilers to add variety to meat selections. Ben is also raising two young bison. “Many producers finish bison on grass,” he said. “I’m feeding them the same TMR as the cattle receive to improve marbling.”

Part of Ben and Michaela’s marketing plan includes ramping up vegetable production to offer a selection of fresh produce for customers who come to the farm to purchase meat. This season they’ll grow six acres of vegetables on plastic, mostly varieties familiar to customers in their area. Heirloom tomatoes and Romas for canning were popular last year, so he’s planning to add more this season. Their fall-planted strawberry field will be ready this spring, and Ben plans to grow a selection of unique gourds and pumpkins for autumn.

The family recently purchased a nearby home and plan to convert it to an inspected commercial kitchen. Dickert Farms been selling produce and meat from a converted machinery shed for produce sales, but future plans include constructing a farm market. Ben said since the family stopped going to farmers markets, they’ve had good business on the farm. Their goal is to offer a variety of meats along with fresh vegetables.

“Having people come to the farm has changed our operation,” said Ben. “We did well when we sold vegetables wholesale and at farmers markets, but people genuinely want to be on the farm. Last year we held a farm day on two weekends so people could visit and see the cattle.”