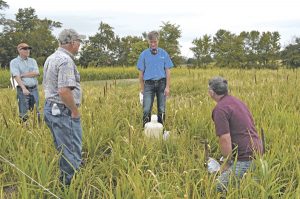 Josh Ramsburg has plenty of experience with cattle. He worked on his family’s dairy farm until his father retired from dairying in 2018, and he had already started farming on his own. After his father retired, Josh sold the cows and transitioned to a cow-calf beef operation.

Today, Josh is grazing 70 cow-calf pairs on 140 acres of perennial pasture on several farms in south-central Pennsylvania. Although the Rock Creek Farms herd was already being managed in a rotational grazing system, Josh was offered the opportunity to participate in a Penn State project aimed at determining the benefits of grazing cover crops in a grass-based system.

“Having some experience grazing beforehand made it a lot easier,” said Josh. “Having animals with experience being moved also helps. If animals have never been rotated, it’s frustrating to jump into rotational grazing from the start.”

This autumn, cattle grazed corn stubble for a short time. That field is now planted in wheat, which will be followed by millet. Cattle also grazed millet this autumn, and those fields will be corn (for silage) next year. Regarding his decision to plant millet, Josh said he has more experience growing sorghum sudangrass, but is aware of the danger of prussic acid poisoning after frost. “The palatability of the millet wasn’t the best,” said Josh. “Once it started to elongate, they left a lot of it. But that was fine for the cover crop and soil health aspect.”

Josh planted millet because the cover crop mix he planted last year included oats, sunflower, tillage radishes and sorghum sudangrass. “We had a frost around October 20, and I had to pull the cows off that day because of the sorghum sudangrass,” he said. “I was worried about the prussic acid.”

One of the challenges for Josh has been developing a watering system suitable for a grazing system, so he worked with NRCS for technical assistance. Josh uses portable open troughs with floats, but found that cows tend to tip them and spill the water.

“The problem is the amount of water that’s initially there when the whole herd of cows go to drink,” said Josh. “With a permanent waterer set in concrete and two bowls, they all have to wait their turn. They aren’t going to tip the waterer over.”

Since profitability on grass is critical to the bottom line, Josh sought cows with grass-based genetics. He started by purchasing a herd of cows with Wye Angus genetics, and retains heifers from that group of cows. He has since purchased additional commercial Angus cows.

The first bull Josh purchased had the genetics he wanted. “My criteria for bulls is grass genetics and docility,” he said. “I need calm animals – they’re much easier to work with.” He purchased a second bull with a high docility score through the Penn State bull evaluation program, and uses that bull to breed the commercial cows.

Josh said there are benefits to both spring and fall calving, and he’s had success getting his spring calving cows bred in summer. About half of the herd, which includes the Wye cows, calves in autumn, and the rest calve in spring. “A black cow in 95º doesn’t always settle,” he said, “but we’ve done well with getting them settled. Our spring calving window is April 1 to June 1.”

This year, 100% of the fall calves were born within 30 days, starting on Aug. 1. “I’m a fan of a fall calving herd,” said Josh. “It’s easy to keep them separate. I put the bull I want to keep heifers out of in with those cows.” He’d consider switching the entire herd to fall calving after he reaches full herd capacity.

Autumn calves are weaned in March, and for this process, Josh has started long weaning. “Calves are separated from their mothers, vaccinated and dewormed,” he said. “They’re started on feed for 60 days, then they’re ready to go into a feedlot.” Spring calves are weaned on Nov. 1, fed through February and are ready for the feedlot in early spring.

Fall calving means both cows and calves must be well-fed well through winter. “We’re experimenting with bale grazing,” said Josh. “There are no hay feeders – all the hay is rolled out on the ground every day. We try to find the happy medium between not wasting hay and not limiting cows. That has helped the fall calves – I’ve noticed significant weight gains after starting bale grazing.”

Josh said prior to switching to bale grazing, he noticed tremendous waste when he cleaned up uneaten hay from around bale feeders. “The amount of hay I cleaned up and spread made me think it was worth trying,” he said. “We don’t have any trouble with cows having sore feet from standing around the feeder in mud and manure. Calves and weaker cows aren’t pushed back like they were from the feeder.”

Bale grazing benefits the soil because uneaten hay and naturally distributed manure adds organic matter where bales are placed. He avoids the wettest ground, only placing a bale on wet ground if the ground is dry or frozen. When it’s muddy, they stay on top of the hill.

With strict culling criteria, overall herd fertility improves because cows that don’t settle won’t be on the farm to pass along poor genetics. “They have 60 to 70 days’ exposure to bulls,” said Josh, “and if she hasn’t settled in three full cycles, there’s no sense in putting her in a different group. If a fall calving cow isn’t settled in 60 days, she’s out.”

Part of the research project involves tracking and comparing water infiltration rates on pastures after cover crop grazing. Dr. Sjoerd Duiker, Penn State soil management specialist, is evaluating soil health on the farm. There’s some concern that grazing cattle contribute to soil compaction, but Josh said the initial measurements show that organic matter from both manure and crop residue make up for any compaction.

Josh has been around cattle his whole life, and said with dairy or beef cattle, everything has to pull its own weight. “Find your margins, stick with your budget,” he said. “We’re careful with costs and finding ways to save.”