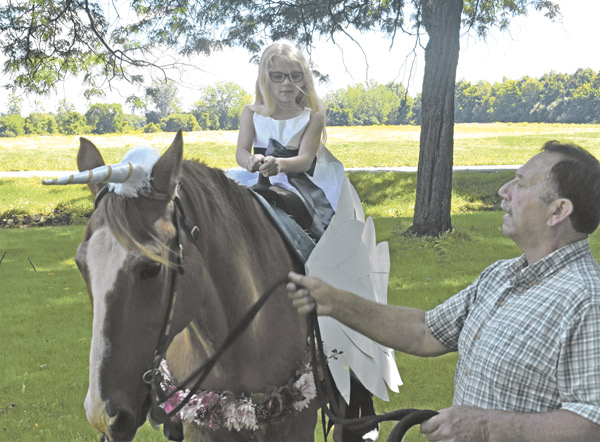 All Emma Durling of Trumansburg, NY, wanted for her fifth birthday was to ride a live unicorn with wings. As she found out, when you wish hard enough, your dreams do come true.

Emma’s mom, Elizabeth, knew that her parents who live in Albion, NY, would be eager to help. They still own her youth horse named Gambler. The now-30-year-old quarter horse wasn’t sure how he got volunteered to play dress-up but basked in the attention and made the perfect unicorn.

Getting her parents and her horse to participate was the easy part. Making the costume proved to be more challenging.

The wings were trickier. She drew different sized feathers on poster board, cut them out and pieced them together to give the wings depth, texture and shape. She estimates she used 16 sheets of poster board to create the wings. The final touch was silver “Twinkle Toes” hoof polish.

“I wanted to ‘paint’ Gambler or apply white makeup to him, but ended up running out of time,” Elizabeth said. “I think it worked better in our favor that we didn’t do that because it would have been more obvious that he had played the unicorn role when he went back into the pasture. She [Emma] asked me where the unicorn went and I told her it flew off without her being able to see it… kind of like how we talk about Santa Claus.”

Riding a unicorn may have been Emma’s favorite birthday present so far, but now she’s raised the bar.

“She has told me a couple of times since then that she wants to ride a unicorn that can fly… I guess I have my work cut out for me next year,” Elizabeth said.