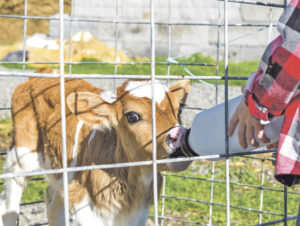 Dairy farmers have been opening their doors and sharing farming practices to help consumers learn more about what happens on the farm. While transparency is positive, consumers are questioning some common practices.

Dr. Sarah Adcock, assistant professor of animal welfare at the University of Wisconsin-Madison, said disbudding is one practice under scrutiny. Adcock explained disbudding as a procedure done before the horn attaches to the skull, which occurs before the calf is eight weeks. “After this time, the horn fuses with the skull and a more invasive procedure is required to remove it, which we refer to as dehorning,” she said.

The majority of U.S. producers routinely disbud calves, usually with a hot iron or caustic paste. Adcock noted a decrease in horn amputations using saws and wires. The recommended age for disbudding with caustic paste is less than one week of age, while hot iron disbudding can be done until the calf is eight weeks old.

“These procedures are painful and require some kind of pain management,” said Adcock. “Changes in disbudding practices over the last decade are in part driven by stakeholder attitude.” In 2019, the American Association of Bovine Practitioners recommended that pain management be considered the “standard of care” for dehorning and disbudding.

Quality assurance and welfare programs are also driving increased use of pain management. “The most recent version of National Milk’s FARM program that went into effect last year [January 2020] changed the standard for disbudding,” said Adcock. “Under their mandatory corrective action plan, calves must be disbudded before eight weeks of age. As part of their continuous improvement, pain mitigation is expected to be used when disbudding calves using any method.”

Both hot iron and caustic paste cause third-degree burns to the horn growing tissue. The hot iron causes a thermal burn; caustic paste causes a chemical burn. While there have been assumptions that disbudding is painful, studies clearly show that calves experience pain during and after the procedure.

Studies show higher stress hormone levels, heart rate and wound-directed behavior such as head shaking, head rubbing and ear flicking. “We also see a drop in play behavior,” said Adcock. “These responses are reduced if we give the calf painkiller beforehand.”

“We predicted that if the wounds were painful, calves would ruminate less to avoid stimulating the wound,” said Adcock. “We found that disbudded calves ruminated less in the first two weeks after disbudding compared to calves that were not disbudded.” Suckling also involves head movement, but researchers found that calves didn’t avoid suckling, likely because suckling reduces pain.

When considering best practices for disbudding, consider which method to use, what age to use it and appropriate pain relief. Dairy farmers should work with their veterinarian to establish disbudding and pain management protocols.

“Caustic paste works by liquifying the horn-growing tissue,” said Adcock. “It’s easier to use than the hot iron, but if it isn’t used properly, it can result in burns to other body parts. Too much can result in tissue damage and runoff into the eyes. Paste should be used within the first few days after birth before the calf has figured out how to scratch her head.”

Using paste in social housing may result in calves transferring paste to other animals. “To avoid paste transfer to other body parts or animals, a nickel-sized amount should be applied in the first week of life,” she said. “It’s important to keep the calf dry for about 24 hours after the paste is applied to avoid it getting wet and running down the face. The calf should also be isolated for 24 hours to avoid paste transferring onto other animals.

“We know caustic paste is painful for at least three hours, but long-term effects are unknown,” Adcock added. “Caustic paste is perceived as being less painful than hot iron by both producers and veterinarians.”

Prior to hot iron disbudding, the horn bud should be numbed with local anesthetic. Adcock said a cornual nerve block administered about 10 minutes prior to disbudding numbs the horn bud for two to three hours. “It’s also recommended to give an NSAID to reduce inflammatory pain in the hours after disbudding,” she said. “A combination of local anesthetic and NSAID is the most effective for reducing signs of pain for both hot iron and caustic paste.” Numbing cream or gel applied to the horn bud is not an effective substitute for a cornual nerve block.

Breeding polled animals would greatly reduce the need for disbudding. Hornlessness is a dominant trait in cattle but present in low frequency in dairy breeds. “We can selectively breed for polled animals by using sires that carry the polled gene,” said Adcock. “Polled genetics is gaining popularity in the dairy industry but it’s still a niche market due to increased inbreeding and slower genetic improvement.” She added that polled sire options are still fairly limited but more are being added to stud services.

Some large U.S processors and retailers are asking suppliers to incorporate polled genetics. Animal health organizations such as the AVMA and the World Organization for Animal Health recommend breeding for polled cattle whenever possible.

Gene editing, which involves directly introducing the polled gene to the genome by changing the animal’s genetic code, is an option for the future. “Gene editing technology could rapidly increase the number of polled animals while maintaining the rate of genetic gain and constraining inbreeding,” said Adcock. “Consumer acceptance would be important for this to be a viable option. A recent poll showed that the majority of Americans support gene editing for hornless cattle.” However, it’s unclear how gene editing will be regulated and is still awaiting regulatory approval.

The proper procedure for disbudding is explained in detail at https://tinyurl.com/y6guqnfj.