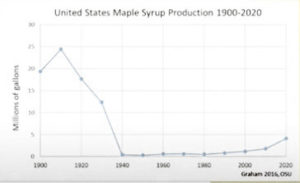 There is no doubt that the agricultural industry has evolved over the years. It has moved from horse-powered plows to tractors and more. Technology and farming methods have improved over the years and with it, the yields and harvests.

The maple industry has also seen growth and change. Production and technology have improved and the maple industry has shifted to meet that growth. As Mark Isselhardt, an Extension maple specialist with the University of Vermont, explained during his presentation, “Timeless and Thoroughly Modern: Maple Syrup Production in the 21st Century,” during the Northern Hardwood Conference, “Technology to produce maple has increased over time, but there are few fundamentals that really haven’t changed.”

Unlike other aspects of the hardwood industry, maple production differentiates itself as it is a non-timber forest product (NTFP). As sugar maples are excellent at compartmentalization, new tap holes must be drilled each season to get good sap flow. With each year of growth, new conductive wood is being added and over time, the tree size and yield are strongly, positively correlated.

Isselhardt referenced a 1922 USDA image which gave insight into past production of maple. He said in the past you would see “sugarmakers emptying buckets of raw sap into a collection tank which is being drawn by horses, then you have an evaporator which is wood-fired – very basic – boiling raw sap… This was the technology of the time. This was actually an improvement over cast-iron kettles out in the woods, which was a relevantly inefficient process that made a low-quality product.”

Maple sugar, not fluid maple syrup, was the main commodity being made throughout the 19th and 20th centuries. It wasn’t until early in the 1900s that maple syrup production started to take root.

There has been a large shift in the maple production industry over the last 100 years. “There’s been a dramatic decrease in production from the early 1900s,” Isselhardt explained. “This is really an illustration of moving away from an agrarian economy. At the time, at the peak (in 1909), you had a lot of farms in the U.S. making a little bit of maple syrup – the average size farm was just over 200 taps. Fast forward about 100 years and you see the average is closer to 1,500 taps per farm and far, far fewer operations in existence.”

“In the modern era, what we see is a tendency to larger operations,” Isselhardt remarked.

Technology such as tubing, vacuums and reverse osmosis (RO) are crucial parts of large operations. Unlike the previous method, where gravity would move the sap, these methods are more efficient and easier for large operations to manage. “RO is the use of membranes to pre-concentrate the raw sap and to remove 75% to 80% of the water with a very efficient machine, compared to the relatively inefficient atmospheric boiling that takes place even in a modern evaporator,” Isselhardt explained.

In modern production, having 10,000 – 20,000 buckets would require a large amount of labor. Switching to using newer technology decreases labor costs and increases the yield and total production (5% – 7% increase in sap for every inch of vacuum), which enables large operations to exist.

Stabilized bulk syrup prices and increases in demand globally have also contributed to the growth seen across the U.S. “Consumers in general are looking for more healthy sweeteners and syrup fits that bill,” Isselhardt commented.

The production variables differ given location, tree quality, production technique, management and other factors. Isselhardt explained, “Average U.S syrup production for a long time was around a quart per tap or less on average. With technology and increasing adoption of modern practices we’ve seen that yield go up over the last 20 years and now the average is about three-tenths of a gallon per syrup per tap. Higher yields are possible; in fact, modern operations can achieve a half gallon per tap or more assuming that they do the basics right: good technology, sanitation… as well as good tapping practices.” He also mentioned that on average, 40 taps or more per acre is considered a good density.

Profitability is based on a range of factors. “Not every big operation makes money, and not every small operation loses money,” Isselhardt noted. “In general, though, there is a lower cost of production for people who only sell syrup in barrels and to a central packer.”

Real estate to collect sap on is a large factor that contributes to the profitability of an operation. In Vermont, Isselhardt mentioned that leasing may be more favorable for some sugarmakers, with rates varying from 50 cents per tap to over $2 per tap. These rates fluctuate and the amount of competing sugarmakers drives the market up.

Isselhardt concluded the presentation with input on the growth potential the maple industry has. Utilization of maple stands range from less than 1% to 12% in the U.S., with higher utilization seen in the Northeast and New England states. There is still lots of room for growth and for more operations to begin and contribute to the growth of this industry.