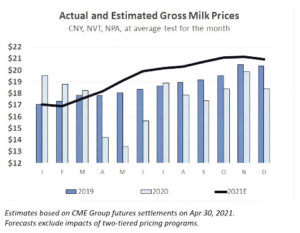 Addressing the New York Milk Marketing Advisory Council earlier this month, Ag and Markets Commissioner Richard Ball said the silver lining to the pandemic has been the fact that the food supply chain has had a light shining on it like never before. “New York is not relying on another region or another part of the world for our food, and that made us fortunate,” he said.

He also noted that Nourish New York was a great program for those in need during the COVID shutdowns, and it couldn’t have succeeded the way it did without the dairy industry. Nourish NY will be continuing throughout 2021, and thus far it has benefitted over 4,000 farms and more than a million households.

Looking ahead, Ball said one of the big things for dairy to be paying attention to is the state’s Climate Leadership and Community Protection Act (CLCPA, at climate.ny.gov), which he said “sets pretty aggressive climate goals for New York.”

“We’re at a Great Depression kind of moment: let’s try this, let’s try that,” said E.V. Baker Professor of Agricultural Economics Emeritus Andy Novakovic of Cornell. “[USDA Secretary Tom] Vilsack is in favor of some of the trial programs. It could be great if New York could be a leader in identifying reasonable [climate] solutions and serve as a national model.”

President of Risk Management for DFA Ed Gallagher spoke on the economics of the future. “The economy is red hot,” he began. “Quarter 1 GDP growth is the best we’ve seen since 2003. We’re seeing stronger prices, but everything is going up.” He added that generally, strong economic growth means better prices to dairy farmers.

Gallagher also noted foodservice demand is rebounding, including restaurant demand, which is growing but still not back to normal.

“We’re all feeling more confident … but we’re far from out of the woods,” he said.

He also stated that U.S. milk production is “increasing at a decreasing rate” (aka growth is slowing). Higher feed prices, two-tier pricing and weather events are all playing roles in that.

Inventories for cheese and whey are not burdensome, in Gallagher’s opinion, and by the middle of summer and into autumn, cheese inventories will be almost immaterial with consumers’ desire for fresh cheese. Butter inventories are a little burdensome, but they’re being supported by exports of 10 million pounds of butterfat.

Gallagher concluded that the outlook for the Northeast is looking good for the remainder of the year. “The market outlook is pretty strong. We’ll see better prices than in 2019 and 2020,” he said. “I am projecting negative PPDs for most of the rest of the year because of imbalance between Class III and IV prices, but they’ll be nowhere near the degree of what we saw last year.”