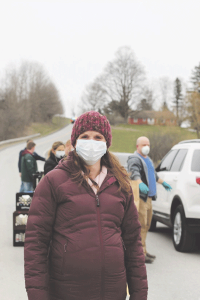 MORRISVILLE, NY – There’s an old saying: “Never doubt that a small group of thoughtful, committed citizens can change the world; indeed, it’s the only thing that ever has.” It aptly describes Ashley Marshall, Sarah Mazza, Kathleen Orth, Sammi Collins and Rebecca Werbela, who have been the driving force behind the “Dairy Drive-Thru” phenomenon, where anyone in the community can get a variety of dairy products for free in a “no-judgment zone.”

“We really wanted to do something for the community to give back, and at the same time we wanted to do something for the struggling dairy industry since the demand on dairy products has dropped dramatically due to the COVID-19 pandemic and to highlight that so many dairy farmers are having to dump their milk because there is no place to send it right now,” said Marshall, assistant professor of dairy science at SUNY Morrisville.

Her team of volunteers from the college, the Morrisville Auxiliary Corporation, the Morrisville-Eaton Central School District and area farmers couldn’t have imagined the response from both the recipients of the dairy products and the robust donations and help from the community.

The inaugural “Dairy Drive-Thru” on Friday, April 10, during snowsqualls and rain, provided 230 residents with bags of dairy items and two gallons of milk each, exhausting the supply in an hour. “We thought we would probably be helping 30 to 50 families in the area that would come through, but never imagined how many people would show up for something like this,” said Marshall. After realizing the need in the community was so great, they got more – much more.

On Friday, April 24, they closed the campus and ushered in a two-lane, one-way traffic pattern. Even with this attempt, cars were backed up on to Route 20. Mazza said Saturday, “There were over 800 families attempting to get dairy products and had exhausted the supply in an hour.”

The Lady Mustangs said their passion couldn’t have been realized without generous donors, including Dairy Farmers of America, Chobani, Stoltzfus Family Dairy, HP Hood, Kraft Heinz U.S. Foodservice, Cabot Creamery Cooperative and the American Dairy Association North East, as well as many community members who helped keep the intensive weekly effort going. “We have been blown away by the support from the community for this event, as well as the overwhelming need for a drive such as this. We cannot thank you all enough.” 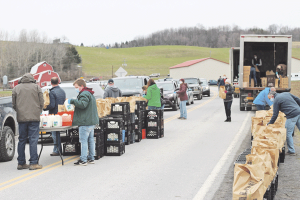 Other communities are reaching out to the Morrisville group for advice on expanding a similar program in their areas. SUNY Morrisville plans to have the drive-thru every Friday as long as they can, but times may change depending on the demand. The volunteers practice proper social distancing, safety and public health hygiene practices throughout the event.

For more details on donating dairy products (milk, yogurt and cheese), or to make a monetary donation, contact Ashley Marshall at adamsae@morrisville.edu.