New life for a cotton mill 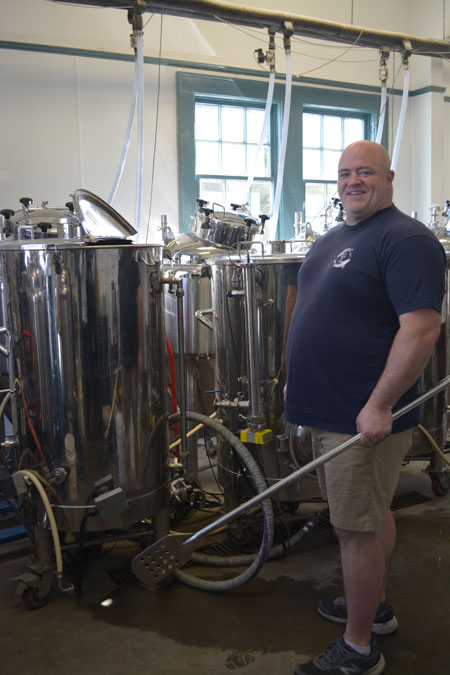 Standing out in the crowded craft beer world isn’t becoming easier, but a brewery incubator in a formerly dilapidated area is helping budding brewmasters while creating an entire community around the concept of rebuilding and inviting tourism.

Josh Parvin, who manages the taproom and distribution at Koi Pond Brewing Company in Rocky Mount, NC, said four partners started the brewery. “Eric Ghiloni started home brewing six years ago,” Parvin said. “Turns out he was pretty good at it. People said ‘you should open a brewery.’”

Ghiloni and his wife Mary met and eventually partnered with Matt and Deb Sperati, who provided honest feedback when they sampled his beer. But what happens between “This beer is really good” and the steps to become a brewery?

Parvin said the partners discussed that topic, and while they were thinking about opening a brewery, Capitol Broadcasting purchased an abandoned 1800s cotton mill in Rocky Mount. The plan was to renovate the property, and part of the renovation would include a brewery incubator. “It’s serendipitous that it came together like that,” Parvin said. “We were the first tenants in that complex where it’s us, four other breweries, three restaurants and a bottle shop.” The complex also includes condos, 60 to 80 renovated mill houses and tiny houses.

“We’re one of the few two-barrel brew houses in the state so we’ve become experts in the two-barrel process,” said Parvin. “The house we’re in was built in 1835 and was occupied by the superintendent of the cotton mill. We have six fermenters, two bright tanks inside and three seven-barrel fermenters outside in a shed.” He described the inside space as cozy and inviting.

Koi Pond’s location is convenient for both locals and travellers. “We’re centrally located in eastern North Carolina on I-95 between New York and Miami,” said Parvin. “We get people who are traveling that way, going down to Florida for the winter or on their way back. We also get people from within the state who are traveling from the mountains to the beach.”

Other breweries in the complex are within walking distance, and guests can purchase a beer at one brewery and walk to the next. Parvin said “coopetition” is the key to making this level of proximity work in everyone’s favor. “We’re in competition with all these other breweries, but we also cooperate with them,” he said, explaining the term. “If we can get 20 people to come to Rocky Mount Mills, we might get three or four of those customers. The more we all cooperate to get people to the campus, the better off we are as a business as a whole.”

The “coopetition” concept is the key to Koi Pond’s marketing strategy. In addition to collaborations with neighboring breweries, part of the friendly competition includes Koi Pond staff talking up the other breweries – sharing information about music at another brewery and suggesting to patrons that they stop at Koi Pond for a brew to take along for the walk over.

Koi Pond has developed 64 recipes, and customers often come in and ask for a particular brew. Although that particular beer might not be available at the time, additional requests might boost it in the lineup. Beer is kegged for tap, and customers can fill crowlers or growlers with any beer on tap. Koi Pond also services about 40 accounts in North Carolina.

In developing recipes and deciding what to brew, Ghiloni and assistant brewer Ben Hostetter discuss brew options, and Parvin provides his input on what’s needed. “It’s a balancing act,” Parvin said, adding they are mindful of customer favorites. “Our beer will be served at the Durham Bulls Athletic Park this summer, so we cannot run out of our Falls Road Golden. If we’re anywhere close to being low on that, they have to brew it. Demand is probably 60% to 70% of what we produce, and the rest is what the brewers want to create and what hasn’t been in the rotation for a while.”

As tasting room manager, Parvin knows the importance of first impressions and how to create memorable visits, whether he’s meeting people at a festival or in the taproom. “It’s about the beer,” he said. “Making a quality product is 100% the first thing we’re after. Right below that is customer service – as soon as the door opens and someone is on their way in, we greet them by name if we know them. We ask how they’re doing and make them feel at home.”

Parvin and others who handle the tasting room are highly aware of the importance of consistently good service and how to introduce patrons to the tap list. “They might look at the list and say ‘I’ve never had craft beer’ or ‘I’ve never been here,’” he said. “We’ll introduce them to the beer wall and tell them what’s on tap, then ask what they normally drink.”

But Parvin also realizes that diversity of patrons means it’s important to have something for everyone, and has spent significant time developing a good wine list.

“We need to have incentive for those who haven’t had craft beer, and once they see we have a good wine list, they come in,” he said. “Some people, especially young couples, are both interested in beer and don’t notice the wine list. Then we have people who are normally wine drinkers and want to try craft beer. It’s a different challenge to find a beer they like. But all it takes is that one beer for someone to find out they like craft beer.”

Parvin described two Koi Pond beers he refers to as “gateway beers” to the craft industry. “One is Falls Road Golden,” he said. “It’s a Kolsch. The other is Opening Day, a cream ale. It’s a light beer, so someone who is used to drinking a big name light beer can get a taste for craft beer without being scared away by a double IPA. Anyone we can convert from ‘big beer’ to craft beer is always a plus.”

A regular schedule of open mic nights, bingo and trivia events entice customers to return to Koi Pond Brewing Company. Parvin was recently at Bank of America Stadium in Charlotte pouring at the Untapped Festival, and also poured at the Tar River Food and Wine Festival.

Although the Rocky Mount complex is almost never without activity that encompasses all the breweries and associated businesses, Koi Pond Brewing Company hosts two major events: Pondapalooza in spring and Koichella in autumn. “They’re an all-day thing,” said Parvin. “We have four or five bands and 800 to 1,500 guests who enjoy live music and food trucks. Neighboring BDD Brewing Company will hold a festival to coincide with their anniversary. They’ll have music, and we’ll probably go there and set up a tent and serve beer.”

The post New life for a cotton mill appeared first on Wine and Craft Beverage News.