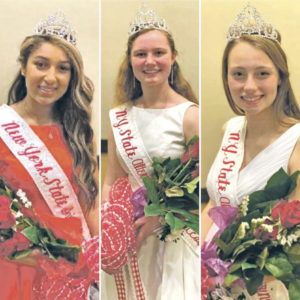 Shelby Benjamin from Chenango County was crowned the 2021-22 New York State Dairy Princess on Feb. 16 during a virtual ceremony that was livestreamed from Syracuse, NY. Selected from among 11 county dairy princesses who have served since the spring of 2020, Benjamin will devote an additional year to promoting milk and dairy products with American Dairy Association North East.

As state princess, Benjamin receives a $1,200 scholarship and will serve as a dairy industry ambassador to promote dairy to consumers by supporting ADA North East strategies with the goal of building consumer confidence in dairy farmers and dairy products. She will also play an integral role in developing and mentoring new county dairy princesses to fulfill the same mission.

While the typical role of a dairy princess is to work with ADA North East at special events, including local dairy princess pageants, farmer meetings, state and county fairs, school visits and sampling dairy products at grocery stories, COVID-19 altered many of those responsibilities. With an increased need for food assistance due to the pandemic, dairy princesses played an important role promoting milk distribution events organized by ADA North East and assisted in handing out milk and dairy foods at various local events.

The competition included a personal interview, impromptu questions, a prepared speech geared toward adults, a product knowledge exam, a writing skills test and informal interaction with others. Judges evaluated the contestants on their communication skills, knowledge of the dairy industry, poise and personality.

ADA North East Industry Promotions Specialist Dawn Houppert, who plans to retire this spring, was recognized for more than 22 years with the association. Houppert has guided thousands of young dairy promoters and committees in their promotion efforts.