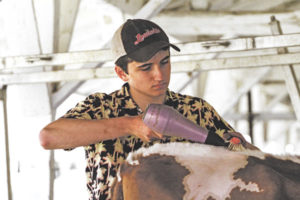 Sixty-seven lots, or 67 calves, were having their coats clipped, hooves polished and were being beautified for the Massachusetts Blue Ribbon State Calf Sale 2021 that took place at the Franklin County Fairgrounds in Greenfield on April 10. According to Moira Poitras, sale chair, proceeds of the sale go toward the MA 4-H Dairy Program.

Evan Cooper of New Braintree, MA, a junior at Quabbin Regional High School, was onsite, one of 20 people hard at work at the fairgrounds prior to the show. “I’m working the sale, clipping calves, getting them ready for other people,” he explained. It takes him about 25 minutes to clip a calf’s coat and have it ready, especially if he’s working with other people, as was the case at this bustling calf sale. At the end of March, he was at the Premier All-Breeds Dairy Sale 2021 at Hosking Sales in New Berlin, NY, clipping animals.

He lives at Cooper Farm, where he and his family raise 40 head of registered Jerseys. “I was born into Jerseys, 100%. I have been working with them ever since I was born,” he said. His dad had been born into a Holstein farm, but after the family switched to Jerseys 50 years ago, the Coopers have dedicated their lives to Jerseys ever since.

Evan has been part of 4-H, showing one or two Jerseys, ever since he was eight years old. His first 4-H calf was Meadow Wings Diller Queen, a registered Jersey. He showed her and other cows at the Jefferson County 4-H Fair in Madison, IN, when his family lived in Lexington, IN, until two years ago, when they moved “the whole farm, 50 head, equipment, everything,” including their farm’s name, to 10 acres in Massachusetts to be closer to family.

Evan’s parents, Edward and Taryn Cooper, are originally from Massachusetts. As their current farm is right off busy I-95 just a half-hour’s drive from Worcester, their location is prime for a possible farm store, one of several ideas they are considering for the future.

The last two years have been spent revitalizing the farm. Their current barn is a 20-head tie-stall barn. At the moment, they don’t milk for commercial use, so all their milk goes to their calves.

“My younger sister, Eden, works at the farm, and she contributes a lot for someone her age,” said Evan of his 13-year-old sister. She is a member of the local 4-H club too, but in 2020 they ceased having meetings due to COVID-19. His older sister, Meaghan, 31, has briefly relocated to Florida for her job, but keeps her cows at their farm.

On Jan. 22, four days before his birthday on Jan. 26, Jonathan Merriam, president of the American Jersey Cattle Association (AJCA), announced that Evan was chosen as one of 31 youth from 15 states to attend the 7th Jersey Youth Academy taking place July 11 – 16 in Columbus, Ohio.

“I’m really excited about checking out farms out in Ohio that market their own milk, and bringing back that knowledge to apply to my own operation back home,” said Evan. “My favorite thing about Jerseys in general is that I love working with them every day. I like smaller operations, with a smaller number of cows, and noticing their personalities and traits, like this one stands on this side of the stall, and so on, and marketing them.”