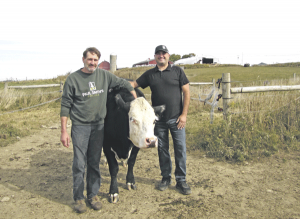 The farm has a storied history. “My grandfather, Nunzio, came to America when he was 16, and they wanted to put him in kindergarten. He said no and started working on the railroad until he could buy this farm,” Dan Palladino explained. His grandfather bought it in 1951, raising dairy cattle and crops. In 1961, he asked to start an Oliver tractor dealership on-site, and did so.

When his grandfather passed away in 1987, the farm went to his father and his brothers. Palladino pursued a career in finance, but always wanted to come back to the farm. When their father passed away in 2009, and he and his brother Nick bought the farm and took over. Palladino Farms has 300 acres here; the partnership with Carley Farms adds another 2,000 acres for crops. More than 80 acres will be dedicated to the 2021 Empire Farm Days.

For five years, Palladino balanced careers in farming and finance before thinking “How do I make this farm work?” They converted to organic. They started a farm store. They started raising barley for the beverage industry. “We wanted to start a brewery so people could get a real taste of the farm,” he explained – and so Heritage Hill Brewhouse was born. (The farm uses the spent grains from the brewing process to feed their beef herd.)

The Palladinos have diversified their enterprise quite a bit. They currently raise between 45 and 60 Herefords and Angus mixes, with a goal of reaching 100 in the next five years. They have a small petting zoo with horses, poultry and goats. There is an on-farm café in addition to the brewhouse, and a large new event space that was built during the pandemic-forced downtime of 2020. All of that led to Lee Newspapers Inc. (publishers of Country Folks and the organizers of Empire Farm Days) to reach out to Palladino to host the farm show next year.

“Lee Newspapers’ objective with all of its trade shows is to make them as exhibitor and attendee friendly as possible,” said Bruce Button, vice president of Lee Newspapers. “Summer farm shows are always a challenge because of the weather and often the location. The weather can be hot and dry or hot and wet and accommodations can be miles away. With choosing Palladino Farms as a location for the next several years, we are able to offer many conveniences that are not normally associated with a summer farm show.” On site, there will be access to WiFi, great cell phone service, a show office with fax service, the air conditioned restaurant/brewery and a building dedicated to space for customer meetings – all within minutes of all types of accommodations. 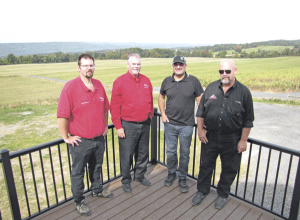 The view from the location includes Onondaga and Oneida lakes and is within minutes of Syracuse, NY. Palladino Farms is easily accessible from Interstates 81 and 90 as well as New York Route 20.

“Never have exhibitors or attendees of a summer farm show had facilities this luxurious!” Button added. “There will be a breakfast buffet available every morning in the Heritage Hill Brewhouse for exhibitors and attendees as well as pastries and coffee in the Farmhouse Café.” Favorite regular food vendors, like the NY Beef Producers Beef BBQ, will be on-site as well. Heritage Hill will be offering a specially-brewed beer just for the show.

Bringing the show back to this farm is, in a way, part of Palladino’s future plans. “Ultimately, I just want a viable farm for the future. This land has been farmed for 175 years. We focused on getting a permanent agricultural easement on our land, and our neighbors jumped on board too. We now have 600 acres in that easement. I wanted to build back a sense of what I had as a kid for the next generation,” he said. “Empire Farm Days was a significant part of our history, and the community is so excited to have it back. It will be a truly family friendly atmosphere. We want to attract people who wouldn’t normally go to a farm show as well as the dedicated regulars.”

The 2021 Empire Farm Days, scheduled for Aug. 3 – 5, has already been approved by the NYS Department of Agriculture & Markets and New York Agricultural Land Trust. Palladino said the county has promised support as well – the farm became part of the Onondaga Grown campaign this June.

“We really want to be partners for the show, not just provide the land for it to take place,” Palladino said. “I want to go all out and do everything right.”

More details on 2021 Empire Farm Days will be released in the coming months in Country Folks, on Facebook and at empirefarmdays.leetradeshows.com.