Pigs and the purpose driven farm 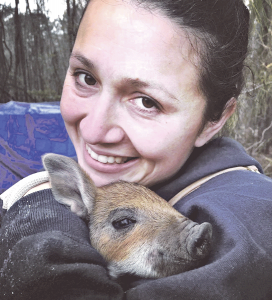 PARKTON, NC – Pastor Rick Warren’s book “The Purpose Driven Life” is a New York Times bestseller, having sold more than 50 million copies. It helps readers dig deep to discover what their mission in life should be. When it came time for Saira and AJ Meneses to change their lives and start their agricultural enterprise, the name seemed obvious: Purpose Driven Family Farm.

Like many new farmers, their journey was a roundabout one. Saira was born in Honduras, and her family moved to U.S. because her father was in the military. She met her husband in 2008 while on active duty, and he talked about wanting to farm one day. The couple moved to Hawaii in 2012 and had two kids. Concerned about their health, that’s when Saira started doing a lot of research on food sources. “I questioned everything in Hawaii,” she said. “Despite it having this amazing tropical climate, it was importing 80% of its produce.”

So AJ wanted to try aquaponics – an expensive hobby. “But what did he want to do after he retired?” Saira asked him. “We needed a way to turn growing food into a business. We wanted to find a purpose. We wanted something that would be blessed by God. It’s not about building wealth, but building a kingdom. It’s not just about money, but people” – hence, Purpose Driven Agriculture.

When the family moved back to North Carolina, they started their farming operation on just two acres, with two pigs and three sheep (even though Saira said she only wanted chickens to start with). She said she had stopped eating pork because her body was rejecting it. “I have found that if you take really good care of your animals, they can take care of you,” she said. Raising their own pigs allowed her to eat pork again without any adverse health effects.

Their farm isn’t certified organic, but that’s how they operate. They rotate their animals’ pastures and use essential oils for various treatments, “and we haven’t had any issues doing that yet,” Saira said. “But we are first generation farmers, and it’s been a gazillion instances of trial and error.”

They now use just under 10 acres of their land, and try to use every inch possible. They do on-site breeding for their pigs. Their first litter was of six pigs; now, they have about 100 on the property, with a lot of woodland grazing. They’re supplemented with non-GMO feed, and the Meneses’ have partnered with a nearby goat farm to give the pigs goat whey and a local brewery gives them spent hops.

“They all have great lives with just one bad day,” Saira joked about her pigs.

Last year was their first year selling at local markets, and their sales took off. Saira said they’ve grown “a ridiculous amount.” Because of that, their seven-year plan includes creating a facility to harvest their meat at the farm (it’s currently done at a state-inspected facility). She does have a meat handlers’ license to harvest and sell their chickens, turkeys and ducks. They sell both whole chickens and pieces, and get about four dozen eggs a day.

“My anniversary gift to myself last year were two Jersey/Angus mixes,” Saira said. “I would love to have 100 acres to do more. The meat just smells better, and our customers say that too.”

Purpose Driven Farm created a mobile market this past winter. They offered customers a list of what was available and they sent in their orders. The local brewery offered their site for pick-up on Fridays. “It’s great, because you can get your beer and your groceries in one spot,” Saira said.

That’s been important with customers continuing to avoid crowded grocery stores during this extended period of social distancing. Saira said a lot of people inquired about deliveries, which was tough to consider because it’s just her and AJ on the farm, but they started providing the service in mid-April.

“Sales right now aren’t as high as they would be at the markets, but we’re getting there,” she said. “We were very concerned when the markets were closed for safety – the longer I keep my pigs [on the farm], the more I’m investing in them. But it’s slowly getting better, with more customers getting comfortable with this new way of doing business. We’re just trying to make it more and more accessible.”

Farmers markets have been carefully reopening in their region; on May 1 they returned to SSH Farmers Market at Carolina Lakes for sales. The veteran-owned and operated farm continues to sell through their farm stand, at the brewery and through delivery – focusing on taking care of both their animals and their customers.

“We wanted to be a different type of farm, and you have to love what you’re doing or it’s not worth it,” Saira concluded.

The post Pigs and the purpose driven farm appeared first on Country Folks.