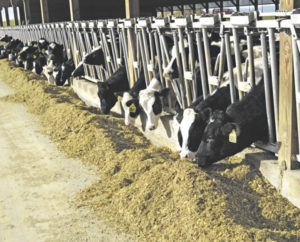 Data collection on the farm can benefit the entire farm team and the dairy’s bottom line.

Dr. Lisa Holden, associate professor of dairy and animal science at Penn State, said cameras are commonly used in various areas throughout dairy farms and can collect valuable information that allows managers to provide feedback. “It isn’t about finger-pointing,” said Holden. “It’s about ‘How can we make things better? What’s happening that we can get this done, work as a team and fix things.’”

Providing feedback can be a tough aspect of employee management. Telling an employee they’re doing a great job doesn’t always come naturally, but it’s easier than a more difficult conversation about feed pushups that aren’t happening on time.

“That’s where video can come in handy,” said Holden. “Managers are not there 24/7 and may not always see what’s happening. When there are videos to review, they can see what time the feed pusher came through and was the feed actually pushed up or not? Sometimes the answer is ‘not,’ but then we have the data and information to sit down and have a conversation, even though it might be a tough conversation.”

Holden said employees desire three things, and the first is to be recognized and appreciated. When someone is doing a good job and is willing to pitch in when things aren’t going well, management should be recognizing these actions. Employees also want clear expectations, preferably outlined in the job description and in standard operating procedures.

“The last thing they want is feedback,” said Holden. “Continuous feedback is the key to performance management. Each employee needs to hear something every day, whether it’s positive or maybe redirection on tasks they’re doing.”

Feedback comes after evaluating performance. Holden explained that informal, frequent feedback involves catching people doing things right. If people are doing their jobs well, even a task they’ve done 100 times, managers have an opportunity to say so. “If you have a correction to make, it should be done in private,” said Holden. “If you watch parlor videos and see one milker who may be shortcutting on prep – whatever it is – you have video to back it up, and that’s the time to have the conversation, and sooner rather than later.”

It’s important to understand that no feedback is feedback. “When you don’t say anything, that matters just as much as when you do,” said Holden. “Providing no feedback for a person’s good efforts is demotivating. They’re trying to do a great job, but no one notices, no one says anything. No feedback indicates that an action is unimportant or unnecessary. Always provide positive feedback to support and encourage correct behaviors, even when the person is simply doing their job correctly and consistently.”

It’s often unpleasant to deal with poor employee performance, but it’s a necessary aspect of management. Most employees want to do a good job but those who have issues should be dealt with because those issues cost money. “If we have a feeder doing a great job versus a feeder that’s sloppier, maybe mixing improperly and losing more feed, there’s a huge cost to that,” said Holden. “A little error, day in day out, can cost a lot of money.”

Poor employee performance reflects badly on the supervisor and drains the morale of other workers. “It creates a climate where it’s okay to do a bad job,” Holden said. “If there are no consequences when I do a poor job and Dave does a great job, Dave becomes discouraged because he’s making the same salary while I cut corners. There’s no accountability.”

Managers should understand the difference between individual and group feedback. Individual feedback involves a particular employee, which may require going in the parlor to watch their procedure. “For feeders, what’s the total mix time?” said Holden. “Electronic data help track feed drops. Is a relief feeder doing things differently, such as under- or over-mixing, that result in changes in animal performance? Are cows sorting feed?”

Group feedback involves aspects such as milk quality measures or parlor shift information such as cows per hour in the parlor or milk per stall for a certain cow group. “That’s something the milking team is working together on,” said Holden, “so unless you have data on what an individual is doing, this is better for a group.”

Feedback is not only “How am I doing with my individual job?” but “How are we doing as a team and how is the farm doing?”

In some cases, managers are unaware of things that shouldn’t be happening. Once the information comes to light, sharing with workers lets them know the manager is paying attention to data and allows them to express a problem. “Sometimes employees don’t come to you with problems,” said Holden. “Nobody wants to come to the boss and say ‘There’s a problem here.’”

Useful feedback is more than saying “good job.” While it’s a nice effort for the manager to start the morning by saying everyone is doing a great job, that message soon comes across as insincere. “It’s just a pat on the back without any real meaning,” said Holden. “Feedback needs to be relevant and directly related to job performance. Feedback should also be credible – not third-hand information you heard from someone else.”

Feedback should be specific. Instead of “You did a great job cleaning today,” a more useful comment would include explaining that removing all manure splatter at each milking avoids buildup. It’s also useful to express to employees that any extra efforts performing specific tasks were noticed and appreciated.

Holden suggested using “If-Then” statements, such as explaining the consequences if an employee is continually late. “If it’s a conversation with no consequence, chances are this behavior will continue,” she said. “Feedback needs to be relevant to the individual, and be sure to follow through.” For habitual lateness, ask if there’s an issue, especially if it’s an otherwise reliable employee who might be having car problems. Understand the “why” behind an employee’s behavior – will it continue to be a problem? Make the statement relevant to what they do – express the fact that when that person is late, milking starts late and impacts cows and parlor throughput.

To improve communication, managers should set goals for themselves, such as providing good feedback to all milking shifts for the next week using available data. Providing feedback isn’t necessarily easy for managers, and Holden suggested practicing before talking with employees. “Practice what you’re going to say, especially if you aren’t comfortable with it,” she said. “Then monitor your progress. After this week, think about whether you gave good, positive feedback, and did you do corrective action if needed.”