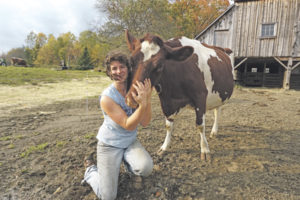 NORTH DANVILLE, VT – “We’ve only been here since September, but we’re definitely getting there,” said Kylie Rossier, a newly minted dairy farmer. “This has been the perfect time. It’s been a blessing and a curse with the economy, not being able to find a job. I think I’m making a lot of good steps in the right direction.”

Rossier is the force behind Sunday Bell Farm, which was officially certified as a raw milk dairy by Vermont on Nov. 27. She set up her milk house the same month, and her cows’ milk is tested every other week for quality and cleanliness assurance. They produce A2/A2 milk, which she sells from the farm and in the St. Johnsbury and Caledonia farmers markets.

She grew up on a small homestead in the Green Mountain State, with her family growing their own vegetables and raising chickens. (She also raised her own pigs in high school). She began working on diversified organic vegetable farms nearby from ages 12 to 19. She attended college in North Carolina, studying sustainable agriculture and environmental education, which she said has served her very well.

“After college, I started working on more diversified livestock farms, and what excited me the most was involving myself in general in the local food community,” Rossier said. She volunteered at local nonprofit that aimed to build resilience around the local food economy, and worked at a local slaughterhouse for a while to see that side of the industry. She wanted to explore all sides of it.

“I got into dairy because I always knew I’d have dairy cows one day,” she said. “In 2017 I got my first cow, a bred Shorthorn-Guernsey cross. I still milk her today. I’m at a point in life where you’re not tied down by anything, so I thought either I commit now, or it’s now or never.”

She dove in by first earning a job as a herd manager at a nearby homestead dairy with its own creamery which milks 30 cows. Rossier moved to her own small farm in June 2020, with the goal of setting up a small farm store from which to sell milk. Eventually, she’ll get a couple of pigs and some chickens and start raising and selling veal.

“We have about 20 acres, but most of it isn’t tillable,” Rossier said. The land was a horse farm for the past 20 years, and when Rossier moved there, there was no grass – “just dirt and daisies.”

“We’re starting at the bottom and there’s only one way to go,” she said. She managed to procure a couple leases for land connected to hers to pasture her animals this year. While she is thinking about becoming certified organic, she wants to make sure she can provide for her cows if they need it.

Sunday Bell Farm, located on top of a hill that overlooks a small village, provides a view of a church steeple from the property. Rossier knows two other raw milk dairy producers that are essentially her neighbors, and one started farming at about the same time as her. She said the sense of community and collaboration with them has been encouraging. “I only have the three cows,” she laughed. “We’re all just selling our milk and trying to figure out life.”

Vermont has allowed raw milk sales since 2009, and Rossier has a Tier 2 registration, which allows for the sale of 12.5 gallons or more per day. “I made that choice to create a more viable full-time dairy business,” Rossier said. “Being in a new area, it’s a new thing. Meeting my neighbors during corona has been interesting, but they’re excited to support me. We’ve been talking about having milk deliveries. It looks like this summer, some of that will be able to happen.”

She said people are curious to try her A2/A2 milk and learn more about it. “A2/A2 milk is no doubt a global trend and becoming more and more popular in the U.S.,” she noted. “Raw micro dairies must be receptive to those global, national and local concerns, curiosities and trends. Many consumers choose raw milk for its wide range of health properties including its easy digestibility, which relates back to A2. There are many possible reasons why folks choose to make the drive up the hill over the convenience of the store. Whether it be for the pleasure and nostalgia of cold, raw milk fresh out of the bulk tank, supporting a small local business, interacting with how food is grown and produced or investing in personal health and wellness, I would go so far as to say that my long-term viability depends on creating more of those opportunities for education, engagement and relationship between land, food, community and health.”

That sense of community inspired her “lending library” as well. “I hope by offering cultures and appliances, people can use our milk to make their own butter and cheese, since we can’t sell raw milk dairy products. I hope it’s a good opportunity for everyone.”

Part of her community is her partner, Sam Rossier. She said she and Sam both had childhood dreams of one day having a farm. He does all their equipment maintenance and repairs and most of the tractor work. “It is great that we have our own separate skills and interests on the farm so we aren’t stepping on each other’s toes,” she said. “It’s nice to know that someone has your back and will support you till the bitter end, no matter how hard you might screw it up.” She also thanked their extended families who visited to help build out the parlor and milk house, put up fencing, work on the house, put up hay and more.

Ultimately, there’s a lot of learning and growth going on at Sunday Bell. “We don’t have the land yet, but we do have all the heart in the world,” Rossier said.

You can find out more at facebook.com/sunday.bell.farm.