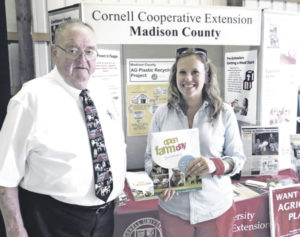 MORRISVILLE, NY – Constituents in New York’s 121st Assembly District are mourning the loss of their beloved, cow-tie wearing friend, lifelong rural advocate and former Democratic Assemblyman William “Bill” Magee, who received his wings on Christmas Eve at the age of 81.

“He was truly an advocate for his district, for rural New York and a voice for agriculture,” said NYS State Fair Director Troy Waffner, who served on Magee’s staff for 11 years.

Magee grew up in Madison County, where his parents ran a dairy and a local store. As a lifelong Town of Nelson resident, Magee, along with his wife Jeanette (predeceasing William in 2018), learned early the importance of hard work and a solid education. Magee worked his way through Cornell University, earning a bachelor’s in agricultural economics in 1961. Following graduation, he became an auctioneer and proprietor of Magee’s Auction House in Nelson for over 40 years, hosting annual shrubbery auctions each spring, auctioning off cheese each Dairy Day for charity at the NYS Fair and promoting New York-grown products wherever he went.

In 1972, Magee was elected to represent the Town of Nelson on the Madison County Board of Supervisors, where he served for 19 years until his election to the NYS Assembly. He was also employed at the NYS Fair from 1985 to 1990 in various positions, including Manager of Agriculture and Livestock, Equestrian Events Manager and Coordinator of Special Projects.

Magee was first elected to his state seat in 1991, in which he represented a district that includes Madison, Otsego and Oneida counties. As a state lawmaker, he rose to chair the Assembly’s Ag Committee, where he was considered a champion of upstate farmers. He supported issues that helped farmers, from putting milk vending machines in schools to voting against a higher minimum wage and the NY Safe Act, which at times put him in opposition with his downstate colleagues. (He was unseated in 2018 by now-Assemblyman John Salka.)

Magee chaired the Legislative Commission on Dairy Industry Development and the Assembly Ag Committee in 1999 while sponsoring and leading the fight for approval of the Northeast Interstate Dairy Compact. He led the rally for the passage of the Farmland Viability Act, which provides financial and technical assistance to farmers seeking to improve their production techniques or better market their products. He also supported numerous proposals to reduce state taxes, energy costs and bureaucracy and was instrumental in assisting many businesses with expansion projects, bringing new job opportunities to his district.

Given that Magee’s district included six colleges, he was a strong voice of support for higher education and the need to preserve funding and financial aid so that all students could attend college. Magee was an ardent advocate for New York’s volunteer fire and ambulance services through his position as chair of the Subcommittee on Volunteer Firefighters. He was a passionate sponsor of FFA and a strong partner of NY Farm Bureau. Magee was recognized with the organization’s highest honor, the Distinguished Service to Agriculture Award. He was a frequent auctioneer at NYFB’s State Annual Meeting, raising thousands of dollars for NYFB’s Foundation for Agricultural Education.

“He put his constituents first during his nearly three-decade-long career in the legislature, but Magee’s impact reached far beyond his district. He also made farmers across the state a top priority as he was successful in passing major legislation like the agriculture assessment tax cap and fought for critical budget funding that supported their diverse needs,” said NYFB President David Fisher. “New York agriculture is better off because of Bill Magee, and we send our deepest condolences to his family.”

He always took care of his constituents, said Troy Waffner, acting director of the NYS Fair. “He called them back, he met with them, he introduced legislation for them and he got funding for projects for them.”

Town of Lebanon Supervisor Jim Goldstein said, “Bill was a sensible centrist who always fought for the farmers and tried to educate downstate legislators about upstate concerns.”

“Bill Magee taught me about New York’s agriculture businesses. I spent a lot time working with Bill on issues facing New York’s farming industry, learning invaluable lessons from him along the way,” said U.S. Sen. Charles Schumer in a statement. On Twitter, Gov. Andrew Cuomo said he was saddened by Magee’s death: “During his nearly three decades in the NYS Assembly, Bill was a tireless fighter for Central NY and farmers across the state.”

Retiring NY Senator James L. Seward said, “As legislators representing overlapping districts, [Bill] and I worked together on a regular basis to address the shared needs of our constituents. While we came from opposite sides of the political aisle, we were partners in doing what was best for our farmers, schools, first responders and communities … Assemblyman Magee’s contributions to our region and the entire state will live on for generations to come.”

Current Assembly Speaker Carl E. Heastie stated, “It is with great sadness that I learned of the passing of former Assembly member William ‘Bill’ Magee. For 28 years in the Assembly, he was a voice and an advocate for his constituents. Throughout his tenure in the People’s House, and while serving as chair of the Assembly Committee on Agriculture, he was a champion for farmers and our state’s agricultural industries. I know I speak on behalf of all of our friends and colleagues in the Assembly in sending my deepest condolences to Bill’s family and friends.”

Paul O’Mara of O’Mara Family Farms in Canastota, NY, praised Magee’s legacy: “Bill Magee was the true definition of a ‘Gentle Giant’ for the agricultural industry. He represented, fought for and was respected by all his constituents, no matter what their political beliefs. Bill set the highest standards for political office and will be missed by all, for years to come.”