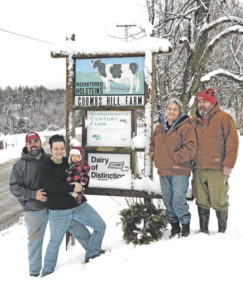 Coombs Hill Farm sits on the top of a hill in Colrain, MA, overseeing coveted vistas, the same as those frequently visited by sightseers and hikers at nearby Mass Audubon Society’s High Ledges Wildlife Sanctuary with views of five states.

This semiquincentennial farm was started when Deacon James Wilson bought 200 acres in 1752. The Coombs brothers were established at a farm next door. When the Coombs brothers outgrew their farm, Edwin Wilson Coombs bought Deacon James’s farm, which became Coombs Hill Farm. Colrain native daughter and ninth generation Karen (Coombs) Herzig has lived here all her life. Her earliest memory of the farm is being with the cows. “I have a picture of me in the barnyard with the cows. I was in 4-H for 15 years. Then I was a leader for 15 years.” Her internal clock is set to rise before dawn to milk the cows.

She lives in part of their two-family house with her husband Charles. Her son Eric Herzig, 10th generation farmer, and his partner, Stephanie Coutu, live in the other half with their son Cooper. Her brother, Rusty Coombs, lives half a mile away. “My parents spend winters in Arizona. When they are here, we are four generations, and a full house,” Karen said. “We make it work.”

She has been steadily passing the reins over to Eric since 2018. In March 2018, she was working in the barn and not feeling well. A stoic Yankee farmer through and through, she dismissed how she felt, but assured her husband Charles that she would call the doctor. After driving 10 miles away, he realized she wouldn’t call the doctor. He turned back and convinced her to go to the doctor. She had had a heart attack.

“The doctor told me I shouldn’t do what I was doing anymore. I had to slow my life down. My son said ‘You had your chance; now I want to try it.’ I can’t do any heavy lifting. I milk one time a day, at night. I feed the calves. I was always go-go-go,” she said. The ingrained urge to care for the cows and do it all never goes away.

To keep herself from jumping in at the farm, she found a job in the Mohawk High School cafeteria where she helps make curbside pickup meals for families studying at home.

“It’s a slow process. We still aren’t there 100%. I do most of the book-work, and help Eric with the cows,” Karen said. “I’m still here, but trying to let him take over.” Heavy lifting is no problem for Eric, “a strapping young man.”

This year, Eric produced 920,000 pounds of milk from their milking herd of 47 cows. It’s picked up by Agri-Mark, a farmer-owned milk co-op that owns Cabot Cheese. Their herd consists of registered red and white and black and white Holsteins. His leap into management brought hard decisions with it.

They normally run at least 40 additional heifers and youngstock, but Eric sold 20 this autumn due to lack of help with chores and feed shortages. Their remaining 15 heifers are being raised by a farm in South Deerfield. They will be bred and when they’re ready to calve, they will return to the milking herd.

It was so dry last year that hay is in short supply. On Jan. 6, Eric had a flatbed truck deliver 16 tons of sweet-smelling alfalfa from Ontario.

“Ordinarily we would have enough silage corn to last but we lost 37 acres of corn. He only has enough for 45 cows,” said Karen.

Their farm currently comprises 110 acres. Traditionally, they rented and farmed their neighbor’s fields to produce enough food for their cows’ feed, including at least 50 acres of silage corn. Unexpectedly, last summer, one neighbor took back a 15-acre section to make hay for himself. Then they lost another section. “The person doesn’t want him growing corn on the land. It’s a not-growing-GMO-corn and no-spray situation. Eric’s only going to have 25 available acres of corn,” Karen said.

They had also expected to have more hay baleage. “Everybody got first cutting. Then for second cutting, there was hardly anything. That’s a lot of the problem, because your feed value, the protein, is from second and third cutting. Some people got it and some people didn’t,” she explained.

They are riding the waves of change as did their ancestors, and making it work. What’s the best part of being at the farm? Karen answered, “I feel good. The cows are still here, and I have a grandson.”

The post Riding the waves appeared first on Country Folks.