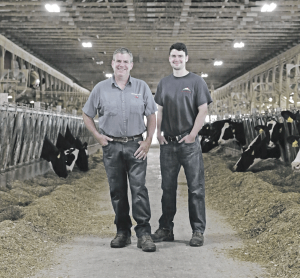 A dairy farm near Lake Champlain has seen a lot of changes over the years, most of which were the result of fluctuating markets and family members returning to the farm.

“My grandparents cut ice from the lake to sell,” said Tony, “then as generations progressed, the variety store dissipated and the third generation started focusing on dairy and maple.” In the late 1960s, the farm grew to include 60 milking cows. Tony, who was raised on the farm, said the family slowly got out of the maple syrup business because continuation would mean a significant investment to update equipment.

After obtaining a B.S. in animal science at Cornell, Tony returned to the farm. Over the past 30 years, he’s been expanding the cowherd, which now includes about 500 cows.

In the late 1980s, an addition at Rusty Creek Dairy included a freestall barn at the end of the tie-stall barn. “We swapped cows in and out of the original freestall barn to the tie-stall barn for a few years,” said Tony. “Once we got started on the third swap, it was time to put in a different milking system. We built a double-six parlor on the end of the original freestall barn, and in 2006, we grew to 350 cows and expanded the parlor to a double-10.” The parlor is an older herringbone that was retrofitted to make it work, and it’s still in use today.

Tony’s son Alec obtained a degree in mechanical engineering, and after working on another dairy farm, he returned to the home farm to manage the crop work.

Tony said the combination of several factors, including Alec coming back to the farm, an aging parlor and current milk prices, made it clear Rusty Creek should consider another expansion to make the numbers work. “Our goal is to fill a trailer-load of milk,” said Tony. “That’s where we need to be for the number of cows we’ll have.” A plan created last year included adding a new barn with a robotic system this summer, and while that project is on hold for now, Tony is retaining heifers to increase the herd size.

At one time, the Rusty Creek herd was registered, and the family sold young stock and bred heifers when it was cost effective to do so. However, for the last several years, purebred sales haven’t been a profitable enterprise. “I was on the judging team and I know the value of genetics,” said Tony. “But we aren’t into the registered side anymore – we’re into the net merit side. Our cattle have been bred for profitability and feed efficiency.”

Calves at Rusty Creek are raised in group housing. Now in the twelfth year of using the system, Tony explained that calves are backgrounded in hutches for about 12 to 14 days, then moved to group housing. Calves drink from automatic feeders until weaning, and have ample time to become accustomed to a feed ration. Tony said calves raised in this system show fewer signs of stress at weaning.

The Rusty Creek herd is currently bred using the Semex Elevate program, which Tony said focuses on getting heifers out of the best cows and using beef semen on the rest. “We’re breeding a lot more beef now,” he said. “It’s more sustainable – we’re making use of every pregnancy.”

Although Rusty Creek had an established beef business, that enterprise has grown over the past several years — especially in the last few months.

“We’ve been crossbreeding to Angus for about eight years and selling to a small base of customers,” said Tony. “We’re selling about 10 animals each year, which are sold in quarters, halves or wholes.”

More recently, Tony noticed people don’t have a lot of freezer space for large portions of beef and don’t want to spend a lot of money to purchase a whole animal. “We tried selling some beef by the cut, and that really took off,” he said. “Last year we processed about 25 animals, and this year we did 10 in April alone. We’ll probably do around 35 to 40 this year.”

Tony said the increase in sales of individual cuts is clearly the direct result of an unreliable supply of beef in grocery stores. When Tony brought back three beef animals from the processor, he sold 1,500 pounds of cuts in just four hours. “We’re developing a steady sales flow because we have cattle of different ages throughout the year,” he said, “instead of having a herd that calves in spring for beef to sell seasonally.”

Calves raised for beef start grazing on pasture in spring if they aren’t going for processing. “Once they’re about five months old, if there’s pasture available, they go out,” said Tony. “They’re finished on a forage-based ration, which is about 60% haylage and 40% corn silage with eight pounds of concentrate.” Tony said this ration puts sufficient cover on animals during finishing and less fat loss at processing, resulting in about 62% cutability.

Although milk prices and COVID-19 led to some changes in plans, the robotic system is now slated to be installed in spring.