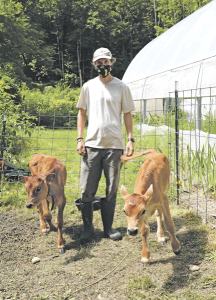 In the aftermath of storm Isaias, full-time farmers Laura Timmerman and her son Robin Creamer hustled to fill their customers’ CSA orders at Sweet Morning Farm LLC in Leyden, MA.

They sell pork, beef, eggs from their flock of about 100 chickens and a variety of vegetables from their year-round farm stand.

Creamer had to cut branches from an ancient maple downed during Isaias to get to the pens inside the pigs’ pastures. They have six sows of mixed breeds, predominantly Durocs.

“The Durocs grow pretty big. They are a rusty color – very pretty actually,” said Timmerman. They sell individual pieces and different cuts of pork, sausage or ground pork at their farm stand. People can also call or email to pre-order certain cuts of meat to pick up. They sell 20-pound pork bundles, which are a selection of cuts that Creamer puts together, according to customers specifications. He handles all the meat sales.

“We have lots of different cuts,” said Timmerman. “We sell kielbasa, hot and sweet sausage, chops, bacon, ribs. If someone says ‘I really want some fatback, or shanks, or trotters,’ we have those things and can get them.”

Their customers rave about their bacon. They offer three kinds, including cottage bacon (less fatty and made from pork shoulders) and jowl bacon (more fatty and extremely flavorful). The Adams Farm Slaughterhouse in Athol, MA, prepares the sausage and cuts.

Their farm stand has been adapted to keep customers safe during this time of COVID-19. “The farm stand used to be attached to our house. Since COVID, we wanted a separate span from our house and set up an open-air farm stand with freezer and canopy. We sanitize it each morning, and ask that people wear masks,” Timmerman said. Following CDC guidelines, hand sanitizer is available, and customers enter the canopy farm stand one at a time. “People have been really great, and really appreciative.” They have many repeat customers, some that come daily.

They started offering beef in autumn 2019. They started with four Jerseys of mixed ages in 2018, and had their first steer butchered the following year. Customers rave about their burgers and steaks. “Each animal makes hundreds of pounds,” said Timmerman, enough to fit their needs. They currently have five steers out on pasture, fattening up, and a handful of Jersey calves Creamer is bottle feeding.

All of the animals are raised on pasture on their 89-acre farm. The pigs are fed organic grain, and the cows are totally grass-fed. In winter, all the animals are fed hay. “It’s one reason our meat tastes so good,” said Timmerman.

In March, they had decided not to do CSA orders, as the immediate future was so uncertain. “As things developed this year, people seemed to want to have local food, so we decided at the last minute to do it. It’s fun – a good service,” Timmerman said. “We pack their share up. At pick-up time, we wear masks and they wear masks, and we put their prepared share out on a table. I like to keep things safe and healthy for everybody. We like waving at people, even if we can’t get too close.” As the vegetables were already planted, and food products were ready, in the third week of May, they decided to offer CSA orders again.

Besides their own farm stand and CSA orders, they bring pork, beef, vegetables and flowers to the Easthampton Farmers Market. They were involved in the decision making for the farmers market too, as Creamer is a member of the market steering committee.

As a whole, “We’ve gotten a bit more adept at how to manage through this time period,” said Timmerman.

Sweet Morning Farm offers a wide variety of different and unusual vegetables, one of their signature trademarks. In a recent CSA pick-up, each order had New Zealand spinach for customers to try. The week before it was callaloo, “a beautiful leafy red and green amaranth.” They like growing both these vegetables, as they prefer hot weather, of which there has been plenty this summer.

What Timmerman likes best is “right now, we are really filling a need for access to good food for people without having to go into a store. It feels really important. I also like introducing people to different vegetables.”

They follow totally organic, no-till practices, are pesticide free and maintain soil fertility through natural methods like using compost. After practicing organic gardening methods for 40 years on their land, Timmerman decided to try farming in 2008 when she started selling produce. Creamer started helping out on weekends, then gradually became more and more involved. They formed their LLC in 2018.

The name Sweet Morning Farm came about because Timmerman thought it had a positive ring to it. It further resonated for her, as she is a morning person. Besides farming, “the other thing I like to do is sing. I’m a shape note singer. One of the songs in our songbook is named ‘Sweet Morning.’”