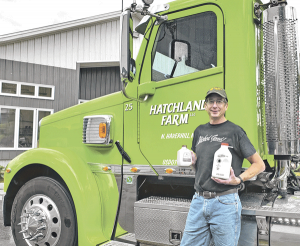 Three generations work at Hatchland Farm in North Haverhill, NH: Howard Hatch, his son Preston, his daughter Kristen (Hatch) May, her husband Dave May, and his granddaughter Emily. It covers 600 acres, give or take a few (some of it is leased).

The farm is co-owned by Howard, his wife Kendra, Kristen and Preston.

They have their own label, Hatchland Farm, processing and bottling milk from their herd of 665 cows, mainly Holsteins with a few Jerseys mixed in; 440 are milking and dry cows, and 225 are younger stock. They bottle their milk for distribution under their own label, plus bottle their milk with private labels for distributors (four in Massachusetts, two in New Hampshire and one in Vermont).

After attending Thompson School of Agriculture at UNH, Howard had been a herdsman, working for someone else. Then he was drafted and served in Vietnam in the 70th Combat Engineer Unit. “His goal was, ‘If I make it home alive, I’m going to work for myself, on a farm of my own. I don’t want to be someone else’s herdsman,’” said Kristen.

He kept his promise to himself. In 1968, he leased a small farm “to get his feet under him and get going.” In 1971, he bought a farm and property in North Haverhill. They expanded in 1999 by buying another farm in the same town. In 1992, they had started bottling their own milk, using both glass and plastic bottles. The processing and storage plant is right next to the milking parlor.

Their private label distributors were found mainly by word of mouth. Some distributors were at one time working farms. “There was a farm in Boston that did what we do, but they stopped farming. They are still working out of the same building from years ago,” Kristen said, referring to Thatcher Farm Dairy in Milton, MA.

Kristen grew up on the farm, ventured to Colorado for a few years, and returned to raise her growing family and to work surrounded by her own family. “This is home. This is what I know,” she said. “I’ve been working in the office for 23 years. I grew up on the farm and helped out with farm chores. So did my brother Preston. He just turned 50; he’s been here his whole life.” She’s recently taken daughter Emily under her wing to show her the ropes of the office.

As an essential business, they’ve kept operating through the COVID-19 crisis, and plan to keep going, following all CDC guidelines. They started scooping ice cream on Mother’s Day in their store that is open year round, where they sell their milk and other products. They are expanding their store – by this time next year, it will include a commercial kitchen.

They grow 200 acres of corn, and produce a combination of dry hay and hay sileage. They employ 25 people year round, and in the summer, employ up to 40.

In April, their cows produced 734,208 pounds (85,000 gallons) of milk. Due to COVID-19 business closures elsewhere, “in the last month, we’ve had to dump some of it. A lot of the customers of our distributors were restaurants, and they closed,” Kristen said. “In a little over a month’s times, we cut our production a little. Between adjusting feed a little bit and drying off some of the cows, we’ve cut production a little” to accommodate need.

Meanwhile, “Home delivery boomed tremendously; Mom-and-Pop stores boomed. We’re not bottling as much as we were at this time last year. Numerous food banks used our extra milk, so we’ve come close to evening out. It’s tricky. We don’t know what to expect, if all of a sudden, demand goes up, and we’ve got dry cows.”

Not only is Hatchland Farm an essential business, their milk is essential to their distributors. For example, Hatchland Farm bottles some of their milk under the Gibson Dairy Farm label and delivers it to Gibson Dairy Farm in Worcester, MA. “The next morning it is delivered to 500 to 600 homes, and 1,000 restaurants or stores in the Central Massachusetts area,” said owner Fran Gibson, along with meat and produce. He estimates that 700 to 800 cases of milk are delivered weekly to food banks, women’s shelters and, when they’re open, daycares and other commercial facilities.

His family has been in the milk business for 97 years. Fran Gibson is third generation, and his daughter Sarah Gibson is fourth generation. Their farm started out in Millbury, MA. “In the 1920s there was a dairy, but in the 1930s there was a fire in the plant and dairy in Millbury. We moved the plant to Worcester on Center Street and had no more cows,” said Fran. In the 1940s they started a dairy plant, bringing milk in from local farmers. In the ‘70s, they trimmed to just milk distribution, as the other was not economically viable.

At the beginning of May, they reopened their seasonal Gibby’s Ice Cream stand on Sunderland Road in Worcester, situated on the original location of the dairy. “We’re right in the center of the city. Everybody knows this ice cream stand,” Fran said. They produce roughly 12,000 gallons of ice cream a week at a Sterling, MA, facility, serving wholesalers as well.

What Kristen likes best is “working with my family, being home. We take great pride in what we make. We tell people ‘We don’t make something that we wouldn’t put on our own table.’ It’s providing a product for the community that’s a staple. It’s nice to know we’re on a lot of people’s tables in the Northeast.”