Sliding windows – and a farm’s evolution 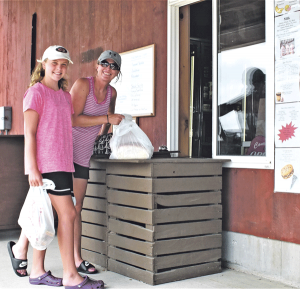 2020 denotes the 75th anniversary of Whittier Farms. It also marks the year that Jim Whittier had the last laugh.

Located in Sutton, MA, Whittier Farms was founded in 1945 with the purchase of a single pair of Holstein cows. Since then, the Whittier Farm and the Whittier family have undergone many changes and expansions.

“We used to be primarily a dairy,” said Samantha Staebner, a member of the family’s fifth generation to work at Whittier. “We found it best to diversify long ago. We had set up a farm stand and retail operation well ahead of many other farms in the area.”

Today, Samantha runs the farm with her brother John Whittier and sister Diana Whittier. The three oversee what on the 500-acre establishment has become a very varied enterprise.

In addition to operating a dairy, the family profits from the wholesale selling of vegetables and cheese. As the business progressed and the farm store has grown, Whittier’s has been seeing more and more sales at its on-site retail location, named “The Milk Store.” Samantha estimated that just over half of all Whittier’s sales are now retail.

“Our goal has always been to be small enough, nimble enough and diversified enough that we are able to adapt to any situation that comes our way,” she said.

Samantha and her siblings have overseen a lot of changes during their tenure. In addition to milk and cheese, their farm store now features homemade baked goods, soups, prepared frozen meals (the macaroni and cheese is a favorite), ground coffee from Red Barn Coffee in nearby Upton, MA, and ice cream from Giffords in Skowhegan, Maine.

In 2014, over 380 acres of the land at Whittier’s was designated a part of the Massachusetts Agricultural Preserve Restriction, which protects the land as production agriculture in perpetuity.

Additionally, Whittier’s erected a building out of which to operate in the 1990s. Since 2015, more than 80% of the farm’s electrical usage has been offset by a 150 kW solar array installed beside the farm store.

In order to keep up with all the necessary work, Whittier’s currently has 15 full-time employees, but according to Samantha, they may need as many as 20 full-time employees when operating at their peak. Despite the current COVID-19 shutdown, Samantha is glad to report that Whittier’s has not had to engage in any layoffs.

“We’ve seen a lot of our customers shift to online ordering and curbside pickup,” she explained. “It’s just another adjustment we’ve had to make.”

And as for Jim Whittier having the last laugh?

“My grandfather Jim was adamant that we install these sliding windows in the front of our building,” said Samantha. “He was just so sure that we would be serving ice cream out of them. He insisted upon it.”

Samantha admitted that they have yet to get around to serving ice cream out of these windows, but they are nevertheless very glad they are there.

“With all the new restrictions and social distancing going on, people are increasingly calling in their grocery orders, and it’s become very convenient for everyone to have them come up to these sliding windows and pick up their orders that way,” she said. While not quite the usage that her grandfather had envisioned, Samantha is quick to add, “We’re very glad to have those sliding windows of his.”

Samantha is always seeking out new ways to serve the farm’s customers. Looking ahead, she hopes to see people take advantage of the opportunity to order hay bales online. “It’s all about being adaptable,” she said.

The post Sliding windows – and a farm’s evolution appeared first on Country Folks.