Something new for livestock exhibitors at the Cornish Fair 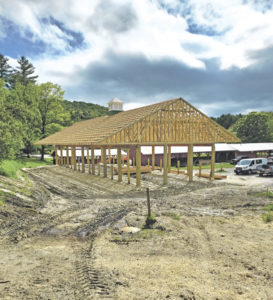 Many people are hopeful to be able to attend a county fair this summer. The Cornish Fair, located in Cornish, NH, has something extra planned, specifically for livestock exhibitors. A new dairy barn is being built in time to be finished for the 2021 fair. A generous, anonymous donor in the community offered to match any funds raised for a new barn. The reaction from the rest of the community was full support, and funds immediately began to collect.

The Cornish Fair, while small in size, is home to one of the largest dairy shows in the state for both 4-H and open competitors. Many dairy exhibitors at the fair will tell you that there was a definite need for a new barn at the fairgrounds. It’s also home to the state Jersey, Ayrshire and Guernsey show, held in conjunction with the fair. This causes the permanent barns on the grounds to be so full, a tent is always needed for extra animal housing. This is expensive for the fair, and the exhibitors would much prefer a real barn to house their cows. The fair board has recognized the need for the barn for a few years, but the anonymous donor was the person to start putting actions in motion.

The fair board contacted John Porter, UNH Cooperative Extension professor/specialist emeritus, and his wife Sue to design the barn two years ago. Both of them have a large amount of experience designing barns in New Hampshire. The donor knew John, and Sue brings experience from her job as an engineering technician for the Department of Transportation. Their original plan was to tear down all the existing dairy barn structures and create a full show barn with an indoor show ring. The fair board wanted to keep their existing structures, so John and Sue settled on building a new, larger barn to replace one of the existing barns. The previous setup included three barns surrounding the show ring tent, and another tent behind one of the barns to compensate for the overflow of animals. With the new barn design, there will be no need to rent the additional tent to house animals, and it will replace one of the existing barns. The other two existing barns will stay in place, and a tent will still be used as a show ring.

John noted that this barn was very difficult to design. The space for it is on a hill, located near a school, and there are several drainage pipes near the foundation. However, those challenges did not stop them from designing something unique and functional.

The barn has several custom design features. It has a 12-foot cantilever roof on each side of the barn, meaning there are no posts directly behind the cows (both for the ease of the exhibitor and viewing pleasure of fairgoers). The barn is divided so that each side has two rows of stalls with the cows facing each other. Alleyways separate the barn into four sections. In total, the barn is 54 feet wide and 96 feet long and can hold up to 120 cows. The barn was designed to eliminate obstructions and make for easy cleaning at the end of the fair. Energy-efficient lighting will also be installed in the barn.

Community support has been the underlying theme for this barn construction. Many people in the fair community donated funds for the project, and many local businesses supplied materials. John himself donated the lumber from a piece of his property. A special six-by-six-foot cupola is on its way from Center Hills Barn.

Several other people deserve credit for this tremendous undertaking. The committee includes George Edson (Cornish Fair Board), Steve Taylor (fundraising), Tom Beaudry and Marsha Clark, in coordination with Wayne Gray (fair board and maintenance). This team had the added challenge of trying to meet during the pandemic. There were some in-person meetings, but much of the work was done via Zoom and email.

“I think I emailed George Edson almost every day for the past six months,” recalled John.

Construction for this barn began on March 27, 2021. The barn will be finished in time for the fair this upcoming summer, with finishing touches being added in the coming months. The other barns at the fairgrounds are also getting some minor improvements with the leftover lumber, and the electrical system is being fully upgraded to allow all exhibitors staying on site to have electricity in their camping areas.

Everyone is excited to see the barn completed. The town is already coming up with uses for the barn while it’s not in use for a show. Schools have discussed the option of turning it into a hockey rink in the winter, since the barn leaves a 30-by-60-foot completely open space without cows in it.

The post Something new for livestock exhibitors at the Cornish Fair appeared first on Country Folks.