Pre-treatment generated biogas with 56% methane, 27% more than the proportion obtained without use of ultrasound. After purification in methane, the biogas can be used as vehicle fuel with a very low carbon footprint compared to conventional fossil fuels. Moreover, in co-generators, the methane can be burned off by the brewery to produce electricity and heat. The final waste can be used as biofertilizer instead of mineral fertilizer.

The innovative process was developed at the Laboratory of Bioengineering and Treatment of Water and Waste (Biotar) in the State University of Campinas’s School of Food Engineering (FEA-UNICAMP). The research group lead, Tânia Forster-Carneiro, is principal investigator for a project supported by FAPESP.

Food processing factories have wastewater treatment plants, in compliance with the law, but do not always treat organic solid waste, which is typically shipped away to controlled or sanitary landfills, or used to produce animal feed. “Research that adds value to organic solid waste is important for industry and society as a whole,” Forster-Carneiro said. “In this study specifically, we pre-treated the waste with ultrasound, an incipient technology usually applied only in the lab and thereby obtained a higher level of methane production. The results were very positive.”

Postdoctoral fellow Luz Selene Buller and Ph.D. candidate William Sganzerla, both awardees of scholarships from FAPESP, are also members of the research group.

As Sganzerla explained, brewery wastes are lignocellulosic (comprising lignin, cellulose and hemicellulose), and the microorganisms that participate in anaerobic digestion cannot easily penetrate the cell walls. “Feeding an anaerobic digestion reactor with lignocellulosic raw material produces low levels of methane, as the microorganisms don’t consume this biomass, which has to be broken down by pre-treatment,” he said.

The study also analyzed energy recovery routes throughout the process, concluding that electricity produced by the biogas offset 80% of the energy required for pre-treatment with ultrasound and anaerobic digestion, while also generating a 50% higher thermal energy surplus than the excess heat that would be obtained without the use of ultrasound. 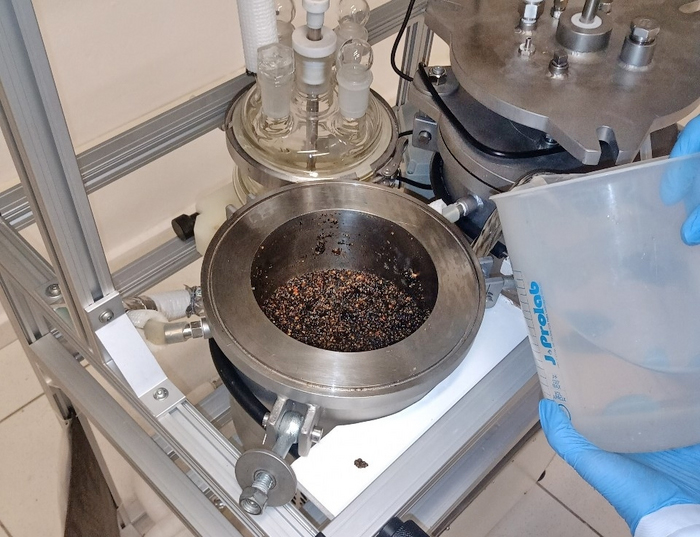 A research group at the State University of Campinas proposes treating the solid waste produced by breweries with ultrasound before submitting it to the process of digestion by microorganisms. Photo courtesy of Biotar/FEA-UNICAMP

“A technological challenge is how to apply sustainable pre-treatment that consumes little energy,” Sganzerla said. “Pre-treatment with high energy consumption isn’t viable for industrial-scale applications. The electricity generated by combustion of the biogas will therefore be used for the ultrasound. The heat produced can be used in industry for the various processes that require thermal energy. All this follows the principles of the circular economy for food production with low carbon emissions.”

According to Buller, nutrient recycling and generating power locally from renewables are key to sustainable development and decarbonizing of food production.

For Forster-Carneiro, the highly detailed measurements made in the study are the main reason why the article has drawn so much attention from the scientific community. “We calculated the balance of mass and energy in all inbound and outbound flows. We showed in detail that it’s possible to produce 0.23 megawatt-hours of electricity for every metric ton of barley bagasse processed,” she said.

The study also presents the potential to generate power from renewables to mitigate greenhouse gas emissions. For over five years, Forster-Carneiro has collaborated with Michael Timko, penultimate author of the article. Timko is a professor at Worcester Polytechnic Institute in Massachusetts and also a specialist in waste valorization. “The study was excellent,” she said. “Very few research projects detail the calculations for generating energy from methane.”

This experiment, among others, arose from the good relationship between FEA-UNICAMP and local brewers, reflected in technical visits and donation of solid waste. The brewery concerned produces 120 – 250 metric tons of barley bagasse per week. “The factory doesn’t recycle this waste at present. It simply gives it away for use in animal feed, but it could treat the bagasse and produce energy at the same time,” Forster-Carneiro said.

“There will come a time when all manufacturers are obliged to treat the waste they produce,” Sganzerla said. “They will have to use the technologies available. Technically speaking, it’s already feasible. We point to various possibilities in our study. No manufacturers do so on a large scale at present because, although anaerobic digestion exists and is a viable technology for liquid and solid wastes, more in-depth research is required for solid and lignocellulosic wastes.”

In 2020, Forster-Carneiro and her team patented the use of this organic waste in anaerobic reactors operated by brewers for the purposes of wastewater treatment.

An article by Forster-Carneiro, Sganzerla, Buller and Solange Mussatto, who is affiliated with the Technical University of Denmark’s Department of Biotechnology and Biomedicine, published in the Journal of Cleaner Production in March 2021, sets out a detailed assessment of the economic advantages of waste valorization, including fertilizer production.

“The anaerobic digestion process treats waste with a high organic burden, generating nutrients as a result. The solid fraction left in the reactor, known as the biodigest, is basically made up of treated lignocellulosic material rich in nitrogen, phosphorus, potassium and other minerals. In the case of malted barley bagasse, there’s a high proportion of nitrogen as well as protein, making it a good biofertilizer that can replace NPK [nitrogen-phosphorus-potassium],” Sganzerla said.

Forster-Carneiro and her team are also researching hydrothermal pre-treatment of barley bagasse. “We feed the waste into a reactor, which under certain temperature and pressure conditions hydrolyzes the biomass [breaking down the molecules] to produce a hydrolyzate [liquid] with soluble nutrients. This is highly beneficial for fermentation processes. However, more in-depth research is needed so that we can arrive at an efficient and sustainable solution for the treatment of lignocellulosic wastes,” Sganzerla said.