The Jolly Green Giant and his Liberty 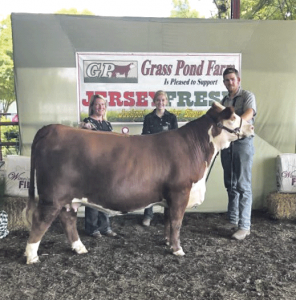 In the past, Caleb Vander Groef’s stature may have been working against him, especially when he was showing calves instead of fully grown heifers.

Caleb raised his cow Liberty from a calf and has been showing her for two years. But at the start, he suspects he may have made Liberty seem a bit smaller than she really was.

“I’m over six-foot-four and 250 pounds,” laughed Caleb. “It sort of made it look funny when you have a little calf standing next to the Jolly Green Giant! At least now she’s a fully mature cow and doesn’t look quite so small next to me.”

Liberty was one of over 150 head of cattle shown at the fifth annual Jersey Fresh Jackpot and Junior Show. The event, normally taking place around Memorial Day, happened this year on Aug. 1 and 2 at the Sussex County Fairgrounds in Franklin.

The event was rescheduled to take the place of the annual New Jersey State Fair. The 2020 state fair was cancelled due to concerns over the COVID-19 pandemic.

The Jackpot and Junior Show is sponsored by the New Jersey Hereford Association. The association oversees the Junior Association, founded to educate young people and encourage their participation in agriculture.

A native of New Jersey, Caleb has been participating in 4-H programs in Sussex County and across the country since he was a boy. About to start his senior year at Liberty University (for which his prized cow is named) in Lynchburg, VA, Caleb is studying international studies, natural sciences, project management, welding and wetlands management.

When he’s not busy with his coursework, Caleb works at Grass Pond Farm in Fredon Township, NJ. Grass Pond is a family operation that has raised Hereford cows on its 160 acres both for their meat and for shows for generations.

“We were glad to have the opportunity to even be at this,” said Caleb of the recent show. “There have been so little shows this year. People are ready to go. It was great to have Liberty out there.”

When asked what sets Liberty apart, Caleb is quick to point out her overall demeanor, and said she almost has a stage persona. “She really seems to know when it’s showtime. Some cows become defensive and don’t like the competition, but Liberty is so personable,” he said. “She knows how and when to show off.”

As they get on in years, Caleb and Liberty are both adjusting to reaching adulthood together.

“Some cows are bred to be champions very early on – it can be very time slot specific. They have a small window when they’re at their best, but then they don’t age very well. They can kind of fall apart,” Caleb explained. “Liberty is not like that. She’s a good, healthy cow.”

He said that while Liberty is due to calve soon, and will mostly be a brood cow going forward, her show days are not quite behind her. “I plan on showing her in the cow-calf pairs division next year. She still has a lot left in her.”

Having just turned 21 himself, Caleb has aged out of the junior division of competition. But this “Jolly Green Giant” of a young man is certainly not done raising and showing. “I love it,” he said. “I’ve been doing this all my life.”

The post The Jolly Green Giant and his Liberty appeared first on Country Folks.