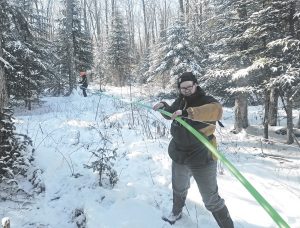 If you want to expand your farm’s maple production, going with tubing rather than collection buckets can make the entire system work more smoothly. It’s vital to set up your sugarbush’s tubing properly so that it works well. Adam Wild, director of the Cornell Uihlein Maple Research Forest, and Aaron Wightman, Extension associate who oversees operations at the Arnot Research Sugarbush, recently presented the “Setting Up a Maple Tubing System” webinar, hosted by the Cornell Maple Program.

“That can actually help you with designing, not just knowing the cost of it,” Wild said. After entering the figures, “it gives you that actual material cost per acre and the cost per tap.”

The calculator can also help producers figure the average sale per acre, which can assist in setting prices or in making decisions about increasing production.

“You want to also make sure that you have a good elevation drop,” he added. “You want to have 3,040 feet to be able to do the 3/16th tubing. Also, that longer stretch is going to be better since you’re creating a vacuum dropping over a longer distance.”

Wild explained that without a vacuum pump, the smaller diameter pulls the sap. With a vacuum, the 5/16-inch size works well, as the vacuum does the work.

Wild found that when he installed 3/16-inch and 5/16-inch tubing under gravity, the 3/16-inch outperformed the 5/16-inch “at least by double, sometimes close to triple, which is fantastic.”

He warned that build-up in the tubing can slow the sap flow, “especially near the fittings. It grows and grows. It’s just slowly clogging it and preventing the flow of maple sap and reducing the flow. You can even see the speed of it just slowing down near the end of the season, especially this past year.” But a month later, the build-up dried into little flakes on the sides. “You could hardly tell that it was an issue,” Wild said. “It may look perfectly fine until it hydrates.”

Some producers use a 3/16-inch drop line or lateral line. Wild said that it’s an additional boost to help the vacuum increase production, but he is concerned that over time, it would plug up. He said a 30-minute soak in bleach solution followed by a rinse can remove the bacteria clogs. “The next year, and it’ll be like brand new,” Wild said. He recommended producers considering a 3/16 drop line should consider putting out new lines each year or performing a sanitation treatment to keep them like new.

Using the right tubing for creating a vacuum effect can really pay off. “For every inch of vacuum, we’re gaining a lot – at times 5% to 6% in production,” Wild said. “For adding a couple inches of vacuum, that should give us around that 5% to 10% increase, but we just got to be careful.”

He added that using 3/16-inch tubing on lateral lines can cause plugging. “The only advantage that I can really see from doing a 5/16 to drop to a 3/16 drop line is that when we look at the tree when it is dropping below freezing – when we’re gaining negative pressure in the tree – that that tree is actually pulling sap back up in through the lines. That’s why the check belts can be beneficial.”

Wightman said he recently put in about 2,000 taps with 3/16 lines with a 5/16 drop. “The thought was to counteract the suck back issue that Adam mentioned,” Wightman said. He found that the lines clogged more readily at the T-joints.

“You really don’t gain an advantage from the 5/16 drop unless you’re also doing something to prevent the clogging of the Ts,” Wightman said.

Wild suggested pumping chlorine solutions through the lines. “The important thing is that if you are thinking about sanitizing lines with chlorine, ensure that you rinse it as well as you can – not just from a food safety standpoint that we don’t want chlorine or in our maple syrup, but also chlorine is salt and squirrels love salt. Squirrels love chewing on tubing as well. You put the two together and you will have a complete mess in your tubing system because the squirrels will just go gangbusters on it.”

Wightman said he’s been experimenting with calcium chloride, which doesn’t attract squirrels quite as much.

Wild likes to check over his lines early, before too much snow falls.

“If you’re in an area that gets a lot of heavy snow, go through and walk all of your lines in November to make sure you know there’s no trees fallen on the line. We try to find as many squirrel chews as possible when we’re out there,” he said.

Wightman said those who install tubing in warm weather should be aware that 500 feet of tubing can shrink as much as six inches in colder temperatures. “If you pull those up extremely tight when you install them in the summer and then you get a cold snap, a lot of those fittings, especially your Ts and your straight connects and your main line, can pull apart,” he said. “It’s important to have your system nice and snug so you don’t have slack and you don’t have sags in your main lines, but go out and check those main lines when you have that first cold snap and make sure none of your fittings have pulled apart, especially if you use plastic Ts and straight connects in your main line. Those pull apart pretty easily.”

Wild said holding more firmly is one advantage that stainless steel has over plastic. “Leave extra and then just go back when it’s colder and connect those lines together, once it’s shrunk back for you,” Wild said. “You can make sure everything’s tight at that point, wherever you have like a union.”

As for choosing the type of tubing, Wild said most catalogs have two or three types differing in rigidity.

Wightman has experience as a bucket producer. He’s been making syrup since the 1970s and currently has 7,500 taps.

“The thing to keep in mind when you’re collecting sap is it’s highly personalized to your own time, resources and money, and even sometimes your own preferences for aesthetics in your woods,” Wightman said. “A tubing system, especially these modern types of tubing systems that Adam has been discussing, are highly efficient. There’s a lot of tweaks that you can do to make them more productive. But once they’re installed, you have this permanent collection system that’s relatively maintenance-free. But it’s important to keep in mind that there’s not just one way to do it. There are different ways to install these. There are different opinions on the type of tubing and type of fittings.”

Wild said, “If you haven’t really spent much time in a sugar bush, I would highly recommend visiting some neighboring sugar bushes. See one, if not more. Ask them if you can walk in. Take a look and see how it’s setup. I think it helps kind of solidify things in your mind … You also get ideas of how people overcame different obstacles that happened within their situation within their forest.”