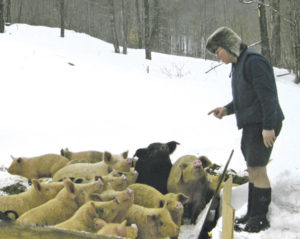 Providing fresh water to livestock on pasture when temperatures are below freezing can be challenging. During the recent Vermont Grazing and Livestock Conference, a panel of three grazers shared how they’ve made winter watering less of a hassle. Bruce Hennessey of Maple Wind Farm, Matt Garcia of Taste for Good Farm and Ben Nottermann of Snug Valley Farm all serve on the Board of Directors for the Vermont Grass Farmers Association. They shared innovative ideas for keeping fresh water flowing.

Garcia has turned to rainwater harvesting to provide an ample supply of water year-round for his cattle, sheep, pigs and goats. This past summer, his region of Vermont received a mere 28.53 inches of rainfall, resulting in sediment problems and extremely low water flow in his well.

Yet even that meager amount of rainfall translates to 53,000 gallons of water running off of his 3,000 square feet of roof, he said. In Garcia’s home state of Arizona, rainwater harvesting is common, so Garcia opted to install a removable gutter system to catch that otherwise wasted water and divert it into 6,000- or 12,000-gallon fiberglass tanks.

Garcia’s gutter system consists of PVC pipes, fiberglass tanks and polyethylene lines which run from the tanks to create a pasture irrigation system. Plasson quick coupling valves are used to connect the tanks to the waterlines, which then feed into the livestock waterers.

One tank is located on the top of a hill and is filled from the tanks connected directly to the gutter systems. A gas-powered pump transfers the water to the hilltop tank, where gravity-fed lines bring water into the pastures. These lines are currently above ground, although Garcia is planning to bury them in the future.

While the temporary gutters must be installed and removed each season, all other components of the system remain in place. Garcia is considering a permanent gutter system, but must take the snow load into consideration.

Tinted fiberglass tanks are more durable than plastic, which tends to degrade in the sunlight, Garcia said. They are purchased used from foodservice production facilities and are kept free of algae and other potential pathogens via the use of chlorine or other water treatments. Each season, they are cleaned out and sediment is removed.

“Rainwater is increasingly reliable, even in the drought … and is far less expensive than drilling a new well,” Garcia said.

Notterman previously hauled water for his cattle herd out to the pastures, both on the home farm and on four separate rented parcels of grazing land. Today, he uses a combination of water sources, including the use of sap tanks (from maple sugaring supply companies) as reservoirs, and runs one-inch black plastic lines which connect to the pasture waterers.

His home farm has 7,000 feet of pressurized plastic lines, which are both above and shallowly buried below ground. The buried lines operate at 160 psi, while the rest run at 100 psi. To prevent damage to surface lines, they are run directly under permanent paddock fencing lines. He has stopped burying lines, and is now running only surface lines, he said.

The first system on his rented land takes water from a hilltop spring and stores it in a 600-gallon, hundred-year-old, hand-dug well. With 3,800 feet of plastic lines, Notterman can provide water to 45 acres of livestock pastures via gravity-fed water lines. There is a 250-foot drop from the spring to the bottom of the line.

“When you plug into it, that line feeds very fast,” he said, due to the steep incline.

A second parcel of land uses a sap tank reservoir, which is filled via trucked-in water. There are 1,500 feet of plastic lines, with Plasson quick couplings every 80 feet, so the pastures here have water no matter the configuration of the temporary fencing.

“Wherever the removable temporary fence falls, we can always reach an outlet for water,” Notterman said.

The third approach consists of a galvanized sap tank reservoir and a solar-powered well pump. The pump is commonly used on grazing lands in the western region of the U.S., Notterman said, where there are large parcels of range without any electricity. The 1,200-gallon sap tank then gravity-feeds water through 2,000 feet of plastic line and into the 25 acres of pasture.

On another parcel, water is collected from an on-site pond and fed into 1,000 feet of plastic line, from which six Plasson quick coupling valves provide water to waterers on 10 acres of remote pastures. Previously, the herd of 70 grazing here required 1,000 gallons of hauled water per day, requiring a lot of labor and time. “I was really tired of hauling water,” Notterman said. “I wouldn’t go back.”

In the pastures, portable 35-gallon water tubs provide flow at about 4 psi, and allow one or two animals at a time to drink. They cannot outdrink the float, Notterman said, and they cannot tip the waterer “unless the reservoir goes dry. As long as you can keep water in front of them, they shouldn’t be in a deficit where they are all trying to drink at the same time.”

Bruce Hennessey grazes cattle, pigs and chickens, and has slaughtering and processing facilities. Providing winter water has been an ongoing project, with surface water lines not doing the job. Over the years, he’s tried many options.

“We had a tremendous amount of grazing that we could do with stockpiled pasture even after things were frozen enough that using our surface water lines just wasn’t possible,” Hennessey said.

In order to maximize that grazing capacity, they installed a centralized watering system in the pastures using passive solar-heated waterers, featuring a super-insulated box with a float valve and a buried water line. Insulated tubes carry the water from below the frost line and up into the insulated box, which is designed to keep the water from freezing.

Continually replenishing the water up top, where it is below freezing, with the 50º F water from the well is key, Hennessey said. In the open pasture, it’s difficult to keep water from freezing, so the waterers must be placed in sheltered locations. Keeping cattle from damaging the passive solar panel can also be tricky.

For the laying hens, which are housed on winter pasture in greenhouses, the watering system uses horizontal nipples, which are installed on the bottom of covered rubber tubs at the birds’ head height. The tubs are supplied with water from a frost-free hydrant, and the water is warmed with heaters placed in the covered tubs. The birds have had no issues figuring out how to use the winter housing watering system.

“Because this is insulated, and it gets filled on a daily basis, and because it is very warm in the winter housing for the layers … we feel like we are not using a lot of energy to keep this water ice-free,” Hennessey said. “This has worked out extremely, extremely well for us.”

All of the farmers agree that having a reliable winter watering source makes things run smoothly. And all continue to innovate and learn from one another’s experiences.