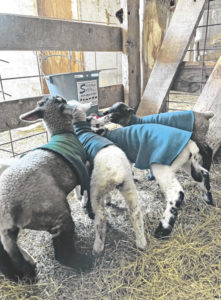 When it comes to weaning lambs, numerous considerations are at play. Decisions are made on a combination of factors including lamb age, availability of pasture or other housing, feed prices and live market prices.

“Think about weaning one week prior,” said Campbell. “Sort out females that will be weaned and remove supplemental grains or high-energy inputs to force reduced milk production.” Ewes to be weaned can be switched to lower quality hay to help reduce milk production. “It’s recommended that we leave females on poorer quality roughage and allow no grain until the udders dry up,” said Campbell. “That will help decrease any issues with mastitis.”

The goal at weaning should always be to minimize stress to both ewes and lambs. Ideally, dams should be separated from offspring, rather than separating offspring from dams. Although it’s easier to remove lambs from where they’ve been housed with their mothers, it’s less stressful to the lambs if the ewes are removed. Young animals are familiar with the area they were born and raised, and exhibit less stress if allowed to remain in the same area.

Weaning involves a change in diet, even for lambs that have been on grain creep or on pasture, simply because they’ll no longer have access to milk. Diet changes are always stressful and can be minimized by ensuring lambs are well-established on a grain and/or forage diet prior to weaning. Be sure lambs are accustomed to drinking water, and provide ample drinking water in several areas to ensure all lambs have access.

Another weaning consideration is social structure and how the strong bond between the ewe and her lambs will be broken. “That’s one of the strongest bonds developed in a young lamb’s lifetime,” said Campbell. “As soon as we break that bond and force comingling, it can be stressful, especially when they’re trying to determine a hierarchy of dominance.”

The physical and sociological stress associated with weaning can result in illness, so it’s important to keep an eye on newly weaned lambs and watch for any signs of illness and identify and possibly separate those that aren’t doing well. Some lambs reduce feed consumption at weaning, but most return to normal intake within a few days.

Many who market lambs shortly after weaning are selling lightweight lambs for certain ethnic holidays. Campbell quotes a sheep and goat manager at the New Holland Livestock Auction who made a statement in 2017 that Campbell said still holds true: A 99-pound lamb is worth the same as a 140-pound lamb. Considering feed prices, it’s usually an easy decision to market animals at a lighter weight.

Producers interested in targeting ethnic buyers should be aware of holidays and plan to sell lambs at the optimum time. Buyers are looking for consistent groups, so if possible, designate lots of similar animals and mark them prior to the sale. Use ample bedding to keep animals clean prior to market transport – the investment in clean bedding will pay off.

“Market animals two to three weeks prior to the holiday,” said Campbell, discussing the ethnic market. “Buyers are filling quotas.” It’s also important for producers to study sale histories and track high and low prices, then determine the most appropriate time to sell.

Since ewes and lambs are being handled at weaning, it’s usually convenient to make culling decisions at the same time or shortly after weaning. One purpose of culling for both purebred and commercial flocks is to remove old genetics from the flock.

Another reason to cull is facilities. Limited space forces the selection of the most ideal animals to remain in the flock. Since many who raise sheep have off-farm jobs, time and labor are considerations. If the best ewe lambs will be selected and retained as replacements, consider pasture and housing space.

For most sheep breeders, some culling decisions are easy: ewes that weren’t bred, aborted their lambs or failed to raise their lambs to weaning are on the cull list. Some breeders place a time limit on ewes’ productive lives (usually around five or six years). At this point, there’s a good chance better genetics have been introduced, and it isn’t worth keeping ewes that don’t improve flock genetics. Ewes at this age are also more likely to have physical issues or fail to become bred for the following year.

Some shepherds have strict rules for determining which ewes leave, although they’ll make exceptions for certain individuals. To maintain a solid bottom line, any exceptions should be based on potential economic return.

Management-based criteria for culling include physical issues such as chronic foot problems, ewes that didn’t breed or ewes that exhibited poor mothering. Udder evaluation is important – is the udder intact, not too distended and with two properly shaped, functional teats? Did the ewe produce adequate milk for multiple lambs until weaning?

For some issues, such as poor mothering by a first-time mother, ewe lambs may be given a second chance. However, the decision to retain such animals should be re-evaluated at breeding time. In some cases, a genetically desirable yearling that performed poorly may be culled in favor of keeping an older, more reliable ewe.

Some physical issues are reasons for culling. Most shepherds cull ewes that produce lambs with entropion (eyelids rolled inward). Although the heritability of entropion varies, it’s an issue that can be eliminated from a flock with culling. Ewes that had vaginal prolapse as a yearling or two-year-old will likely prolapse again in a subsequent pregnancy, so those ewes should be eliminated. Most producers do not retain female offspring from ewes that have prolapsed. Lambs with incorrect mouth structure (over- or underbite) don’t usually gain efficiently, so ewes producing such lambs should be culled, and their ewe lambs should not be retained in the flock.

Culling decisions for purebred breeders can be difficult, especially if particular animals were introduced to improve genetics. Newly purchased animals that perform poorly are also difficult to eliminate, but should be culled to maintain genetic progress.