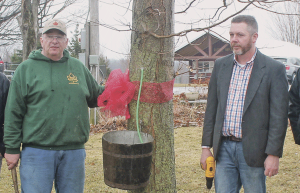 A short season. Half a sap crop. Coronavirus. Social distancing. But the worst thing of all this spring for Lawrence “Larry” Rudd of Rudd’s Family Maple Syrup in Mannsville, NY, is not seeing family and friends.

Rudd is a third generation maple producer. His grandfather Emery Rudd started the business in 1921, passing it on to Larry’s dad Manford, and now Larry runs the business in partnership with his son Justin and grandson Aiden.

“Justin and Aiden are our woodlot managers and handle tapping, collecting, and maintaining production and equipment. The extra workforce at the beginning of the season includes our granddaughter Jenna Canipe, nephew Paul Graves, and close family friends. At the end of the season, they help pull taps and with special events including Maple Weekends and family pancake-and-syrup days,” Rudd explained.

The 2020 sugaring season in Rudd’s sugarbush that sits on the edge of the Tug Hill plateau in Jefferson County was shortened by weather conditions.

“Because of high barometric air pressure, which does not encourage a good sap run, we made only a half a crop of syrup this year,” Rudd said. “That is just nature’s way and there’s nothing you can do about it.”

Once the coronavirus began to limit travel and postponed the state’s annual Maple Weekend promotion, visitation naturally fell off at sugarhouses statewide. Producers found new ways to supply syrup and confections to customers.

“When we designed our new sugarhouse about 15 years ago, we wanted to make the building more handicap-accessible. This year that means everyone can easily drive right up to the sugarhouse door (at 16370 Balch Place, south of the village of Mannsville). If they call ahead, we can set the product they want out and easily maintain social distancing,” Rudd said.

Because of the shorter season in 2020, the Rudds concentrated on making more syrup and limited the supply of confections such as maple cream and maple granulated sugar. Still, Rudd said, “If people want the confections, they can call and we will do special orders for pickup or mail order.”

“This year because of the social distancing, we greatly miss seeing friends and family, especially our grandchildren. They all pitch in to help in some form. Our two youngest grandsons, Colton, 4, and Mason, 2, can pick out which trees are maple in the woods, and Colton knows the basic operation of how syrup is made, including how equipment such as the RO (reverse osmosis) works in the sugarhouse. We have three grandkids who live out of state and always come back in the spring to help us with sugaring,” he added.

In addition to Maple Weekends’ open house events in March, Rudd’s Family Maple Syrup has provided syrup to the local church for a pancake breakfast fundraiser and has been a major sponsor of the Mannsville Maple Sap Run 5K Race, 3K Walk, and Kids Fun Run. Both community events are held as part of the Maple Weekends, usually on the second Saturday.

“We are missing all of our local maple-related celebrations of spring this year. Maple Weekends have always been a great way to educate the public and share our local maple heritage. The Sap Run is especially blessed with an amazing number of our sponsors contributing to benefit the Mannsville United Methodist Church and the Mannsville Museum,” Rudd said.

The Sap Run and pancake breakfast may be rescheduled for sometime in the fall. 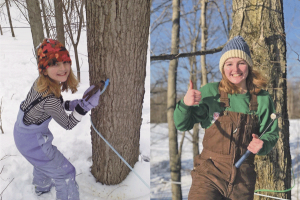 Rudd laughs when he tells of another postponed event.

“I like to tell people I was invited by a private school to be a guest speaker on the process of how to make maple syrup and was disappointed when they had to cancel because of the virus. I have to confess that the private school is my grandson’s nursery school,” said Rudd.

So, while Rudd is disappointed not to be sharing his good humor and lifelong sugaring experience with loyal, “every-year” maple customers and new sugarhouse visitors looking to discover the sweet tradition of maple this year, he said, “People are doing the right thing, what we should be doing. Even in the woods, when we pulled taps this year, we practiced social distancing.”

Meantime, Rudd is busy as president of the Lewis County Maple Producers Association, and the Rudd family is using this quieter season to prepare for the 100th anniversary celebration of Rudd’s Family Maple Syrup. They can be reached at 315.405.1479.