What do beef cattle and environmental stewardship mean to me? 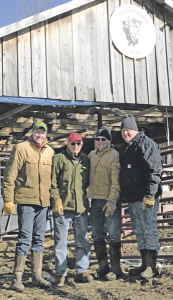 On the drive home from a late-August Western New York cattle sale, Ric and Karen Coombe reminisced about their kids’ experiences showing registered Angus cattle. As their youngest son ages out of Junior Angus and Junior Beef Producers events, they wanted to give other youth the opportunity to enjoy similar experiences.

“We thought about how we could help other kids and their families get involved,” said Ric Coombe, who co-operates Thunder View Farms LLC, a multi-generational beef cattle business in Grahamsville, NY. “We decided on an essay contest and all we needed was the topic. Karen said it had to be environmentalism because of our farm’s history.”

Youth who complete an application and write a 500-word essay that “explains what beef cattle and environmental stewardship means to me” have an opportunity to win a registered Black Angus heifer of their choice. Second through fifth place winners are eligible for a discount on a 2020 heifer calf valued between $1,750 and $2,000.

The Coombe family’s involvement in advocacy started with the Clean Water Act of 1985. The proposed legislation would have put most farmers out of business because it required 250-foot setbacks from streams, according to Dick Coombe, Ric’s father. Rather than protest, Dick took action to protect his family’s 1,500-acre farm and the region’s agricultural roots. He led a group of local farmers through intense negotiations with the city to find a solution that protected water sources and farmers.

Dick was a founding member of the Watershed Agricultural Council (WAC). The nonprofit board, serving as the governing link between city water officials and farmers, was born out of the process and continues today. His talent for protecting agriculture and the environment, while working with politicians, caught national attention. He was appointed by then-President George H.W. Bush to run the USDA’s NRCS for five years. In 1996, Dick was awarded the Environmental Action Council’s Green Star Award.

“At the end of day, we need advocacy in agriculture and we need people not to be afraid to say what we do and understand the issues and we want to get kids thinking about it,” Ric said.

The judges’ committee includes several of the most respected cattlemen and women in the industry: Rich Brown, Cattleman’s Beef Board member; Jean O’Toole, executive director of the New York Beef Council; and Christine Bannister, a dedicated show parent who also ran programs for the Junior Angus and Junior Beef Producers.

“It was really important to us to have an independent committee so there was no perceived notion for who would win,” Ric said. “These are esteemed people in our industry who are going to figure out the winner.”

Applicants must be between ages 14 and 20 and members of the NY Junior Angus/Junior Beef Producers. A membership can be purchased before essay submission. Winners are expected to show the heifer in 2021 at least at their county fair, the NYS ROV show, at least one NY Junior BPA event and potentially the Angus Junior Nationals in Harrisburg, PA.

Applications are due by Oct. 4. Finalists will participate in a judges’ interview. Heifer calves available through the program will have pictures posted online before the end of September, will be broke to tie and ready for pickup Nov. 15.

“People talk about how beef and agriculture are bad for the environment, but we are stewards of the land and need to tell the story,” Ric said. “Young people can be great ambassadors and we are hoping for some great ideas. There has already been some excitement with people looking at the application.”

Ric hopes this is the first of many years of this opportunity based on an evaluation at its completion.

“My kids participated in these programs, all of which give tremendous support to the youth and offer great scholarships,” he said. “We hope that this will be another benefit to drive a few more young people to get involved.”

The post What do beef cattle and environmental stewardship mean to me? appeared first on Country Folks.