You can have your feed efficiency and eat it too

Let’s talk feed efficiency. That is, after all, very relevant to profitability in the cattle business, especially given today’s high feed costs.

But relevance is one thing. Reality is entirely different. And the reality is that feed efficiency has not received the focus it deserves as a key profit driver for beef producers.

Here’s even better news: genetics and genetic tools exist to build cattle that are highly efficient while still meeting or exceeding the carcass quality targets that earn packer premiums and satisfy consumers.

In any scenario, that’s good. In a time dominated by high feed costs, that’s even better.

“If we talk about feedlot profitability, the biggest single driver is selling price,” said Dr. Kee Jim, CEO of Feedlot Health Management Services. “But that’s not something you can necessarily control. So then, feed efficiency or feed conversion is by far the most important production attribute.”

Feedlot Health Management Services offers a suite of feedlot consulting services covering all aspects of procurement, production and marketing. The company is globally the largest of its kind and has clients in the U.S., Canada, Mexico, Latin America, Kazakhstan, Russia and China.

It’s important to note that feed efficiency and average daily gain (ADG) are not the same. In fact, in today’s marketing environment where most fed cattle are sold on carcass merit, ADG is only marginally important.

He has the experience and numbers to back that up. He’s been collecting feed efficiency data on a pen basis in his feedyards for more than 30 years and individual data on the cattle in his seedstock operation for more than 15 years. 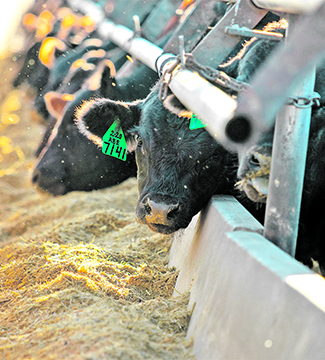 Up to now, there has been little incentive for cow/calf producers to select for feed efficiency because there hasn’t been a good way to monetize it.

That’s certainly true if you sell your calves into a commodity market. But just like proper health management on the ranch, there are potential premiums for cattle with a genetic ability to convert feed to gain more efficiently while still producing high-grading carcasses.

According to Dr. Bob Weaber, professor and head of the Eastern Kansas Research and Extension Centers with Kansas State University, the heritability of feed efficiency is around 0.3 to 0.4. That makes it moderately heritable, much the same as the production traits of weaning weight, yearling weight and carcass characteristics.

Given the remarkable improvements the beef business has made in increasing upper two-thirds Choice and Prime carcasses, it’s clear the same genetic strides can be made in feed efficiency. But you can’t capture that value if you sell your calves at weaning.

Fortunately, there are value-added programs that allow cow/calf producers to capture the carcass value they’ve bred into their herd. The benefits of feed efficiency flow to all cattle, whether they’re marketed conventionally or are in value-added programs, said Wulf. That’s because in today’s marketing environment for cattle feeders, feed efficiency is the number one driver for potential profitability.

However, when feeding cattle for value-added programs that don’t allow production technologies, genetics (specifically better feed efficiency genetics) is the only lever to pull, he said.

How can a cow/calf producer make money by selecting for feed efficiency? One way, according to Wulf, is to become part of a value-added program that rewards more efficient cattle that also produce the upper two-thirds Choice and Prime beef that consumers demand.

The other is to work with feedyards in producing the type of cattle they demand and will pay up for. “Work with a genetics supplier who is measuring individual feed intake and producing bulls with the genetic potential to increase the feed efficiency of your calves,” he said. “And if you aren’t owning the cattle all the way to harvest, work with a feedyard and start building a history on your calves and how they perform. Track improvements from year to year so that you’re able to capture that value.”

That can be best achieved with crossbreeding, said Jim. There’s no question the genetics exist to produce Yield 1 and 2 cattle that marble well. “Generally, that’s most easily achieved through crossbreeding (a Continental breed such as Limousin or Lim-Flex on British-based cows) to get the maximum combination of a balance between gain, feed efficiency and carcass.”

The post You can have your feed efficiency and eat it too appeared first on Country Folks.